Continuing our conversation with the filmmakers behind epic fan-film Deadpool The Musical 2, as we cover the evolution of cosplay, the attraction of the Deadpool character, and after-credits sequences! 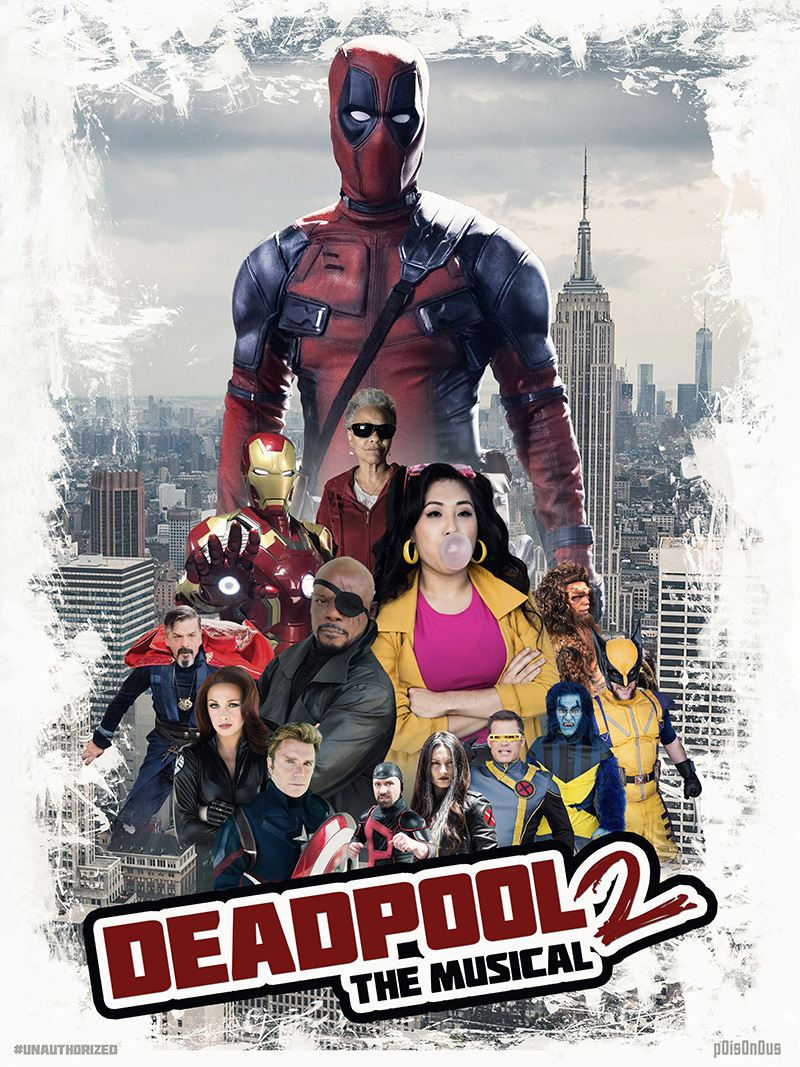 With the amazing results and reactions to their film, we discussed the influence and evolution of cosplay, and whether elaborate fan-films will become more prevalent, as a natural next step.

Julian Higgins: “As a fan of all kinds of cosplay-heavy conventions myself, the strides in the craftsmanship continue to blow me away every year. On the back of that cosplay creativity, the world of fan-films is into a realm unseen before. You even have celebrities like Nathan Fillion getting into the spirit now! There are more costume creators than ever, using all sorts of incredible technology and online crowd-sourcing of information to bring even more film-accurate costumes to life.”

Jo Crandall: “People always want to go for accuracy. It used to be with any sort of tech or custom prop, someone spent 50 to 60 hours sculpting a prototype out of clay and then making a mold of that, a very time-consuming and expensive process. With the advent and accessibility of 3D printers and Amazon Prime, you can easily either design and print something that looks exactly like what you saw on screen, or get something that is really close and then make your own adjustments to it.”

Paul Bianchi: “I think we’re going to see more and more fan work because everyone has their own idea of the stories that they want to tell with these characters that they’ve fallen in love with. As the ability to make your own film becomes easier with more accessible technology, people are going to be whipping out stuff beyond the scope of what we’ve seen.” 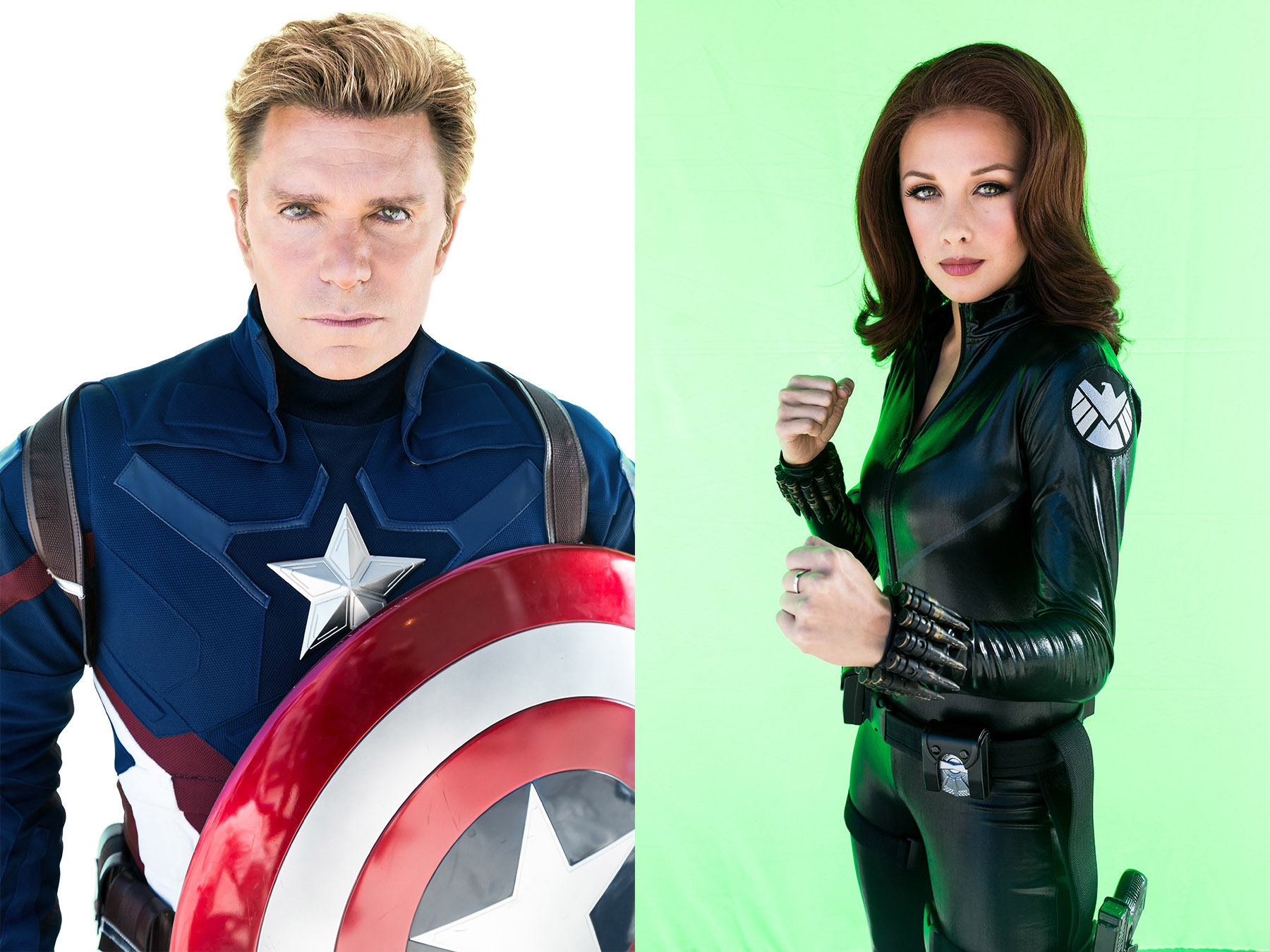 Brian Danner: “I like that new media and the Internet has given us the freedom, and I see a lot of cosplayers to be extremely responsible and reverent towards the characters. When the four of us got together and wrote this, it was a love letter to the things that we grew up with and the people in our lives, the cosplayers, the geeks, the nerds, the gamers. It’s really just because we are such fans ourselves. It almost puts a different spin on the word fan-film; it’s for the fans and it’s by fans.”

Jo Crandall: “It can be like a feedback loop: you have cosplayers make mashups because everything’s been done; they go to a con where the actual artists see these mashups and go, ‘That’s really interesting, I like that’ and then actually use that in their work. So I don’t think there’s really a ‘How far can it go or has it already gone too far’ type thing; it’s always going to evolve. With the internet people now have the platform to put up these videos that no one would have seen even 10 years ago. So I don’t think there’s a ceiling.”

Michael Parker: “The technology is enabling us to do more, but I think we’ll see more shorter pieces. At these prices, you won’t see a lot like ours!” 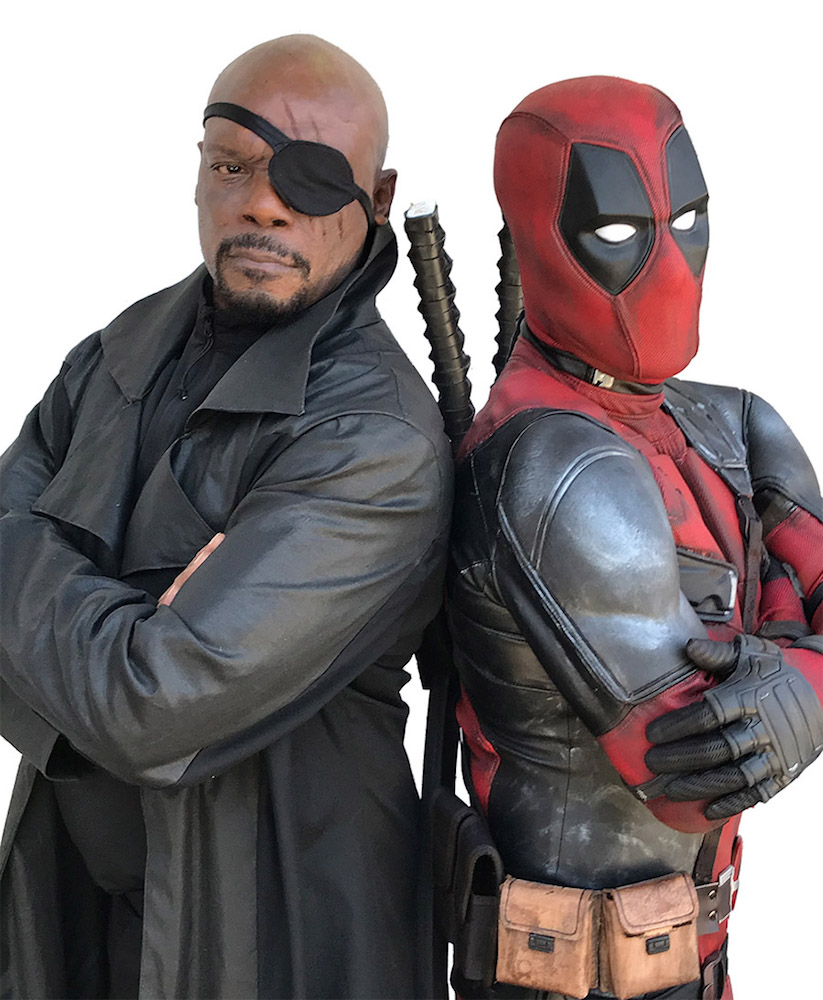 On the allure and appeal of the Deadpool character, and what he inspires and allows people to get way with:

Paul Bianchi: “One thing that I’ve enjoyed in writing for him is this idea that anything can happen, that nothing is off the table. I honed my comedic writing at Second City Hollywood, and Second City is known for satire, so one of the things that I loved was being able to use Deadpool to plug in my own satirical commentary through his voice. You can use his voice to say just about anything as long as it’s true to one of his many disturbed personalities.” 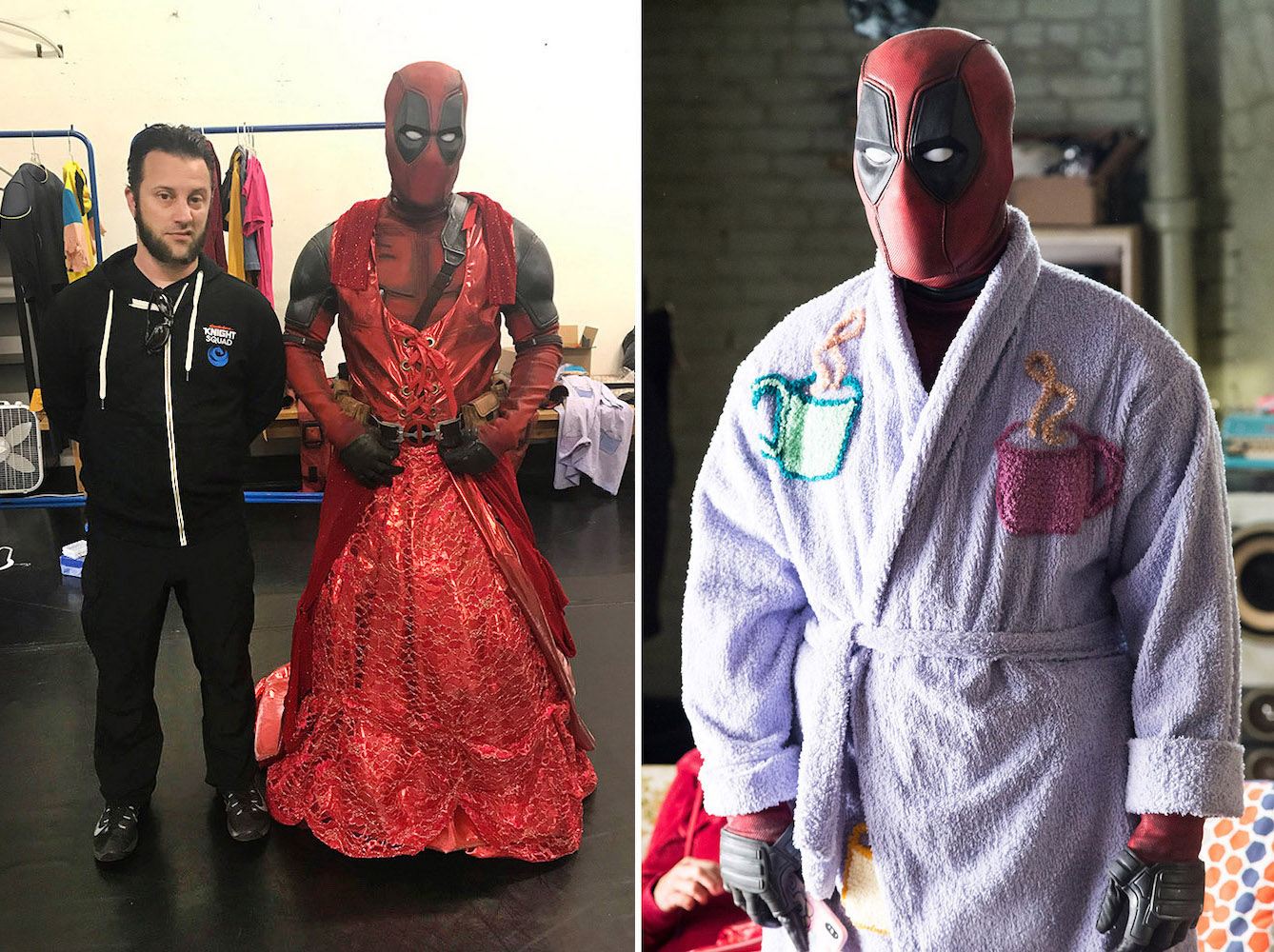 Michael Parker: “It’s wonderful to play the character, it’s an homage to Ryan Reynold’s portrayal. I’m pretty mouthy on set, and the suit is very liberating, it’s a very physical performance. When we look at the Deadpool character, would he say this, what are the movements? Sometimes it’s simple head bobs and nods, and Deadpool is a very improvisational fighter. The hard part is interpreting the body movements as he moves from one action to another, because he can’t see where he is. You have members of the crew or stunt team there to catch that bull as he’s moving through.”

Jo Crandall: “On a professional level, it’s given me an outlet to try to take risks and fail, that I wouldn’t have been able to in my own personal life due to having to make rent. If you’re being paid to fail, then you’re able to fail and make huge leaps. A year from our first Deadpool musical, I’ve made huge strides in my work; it has allowed me to fail and become better. On a personal level, I also like that the Deadpool character allows you to cross the line.” 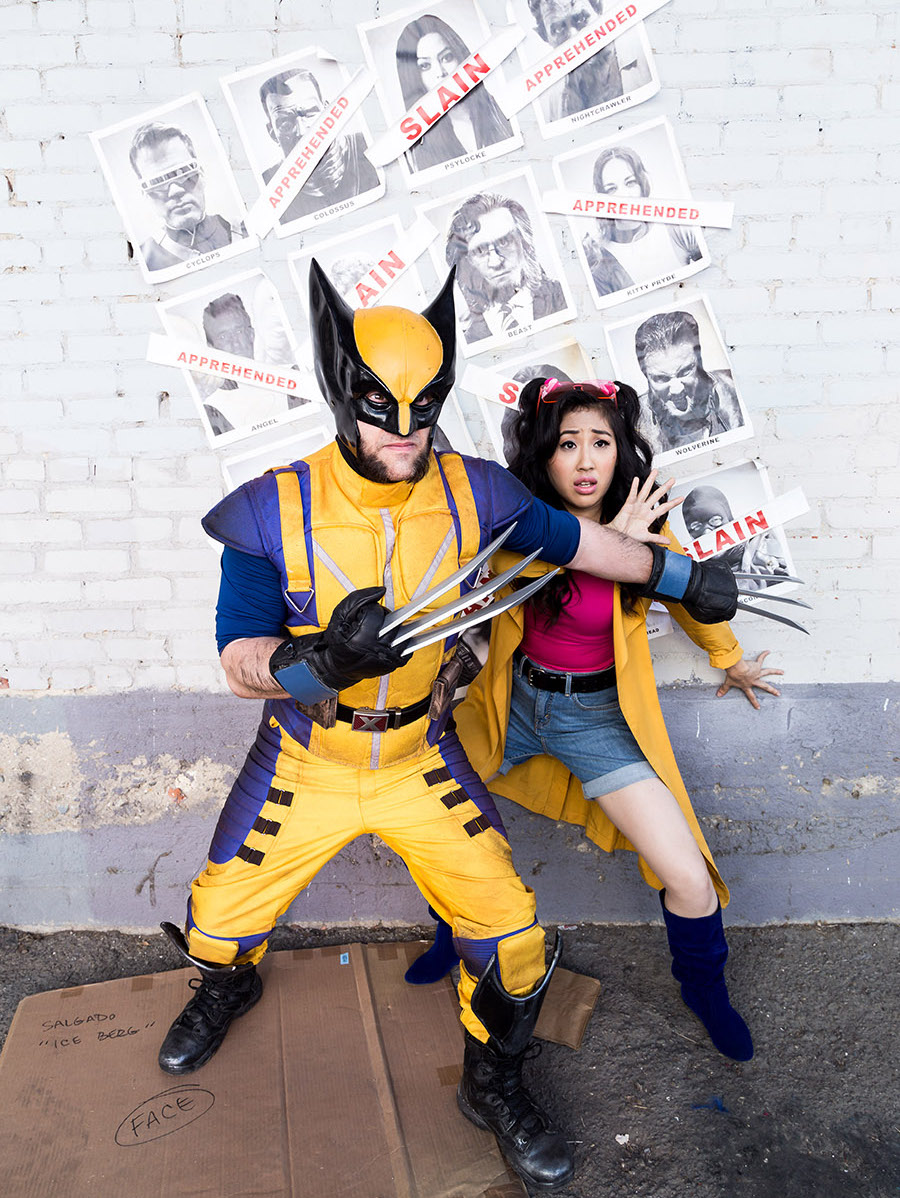 With the music aspect of the film done so well, we asked the team if they would actually be surprised if FOX took a page from their book and had a musical number in a future Deadpool film.

Paul Bianchi: “A lot of fan response has been, ‘Hey, this actually fits within the cinematic storytelling of Deadpool,’ and I couldn’t agree more. If Deadpool broke out into a musical number — I’ve seen it happen in a comic book before — there’s no reason it can’t happen in a movie.”

Michael Parker: “We’re proud of what we did, especially the music. The Disney music is so absolutely wonderful, it sadly really lends itself to this! At this point if they do a song that’d be great. Disney’s doing all these live musicals right now, taking the cartoons into live action and taking their live action to Broadway, so there is an opportunity for a real Deadpool musical. Or maybe we ARE the real Deadpool musical…!” 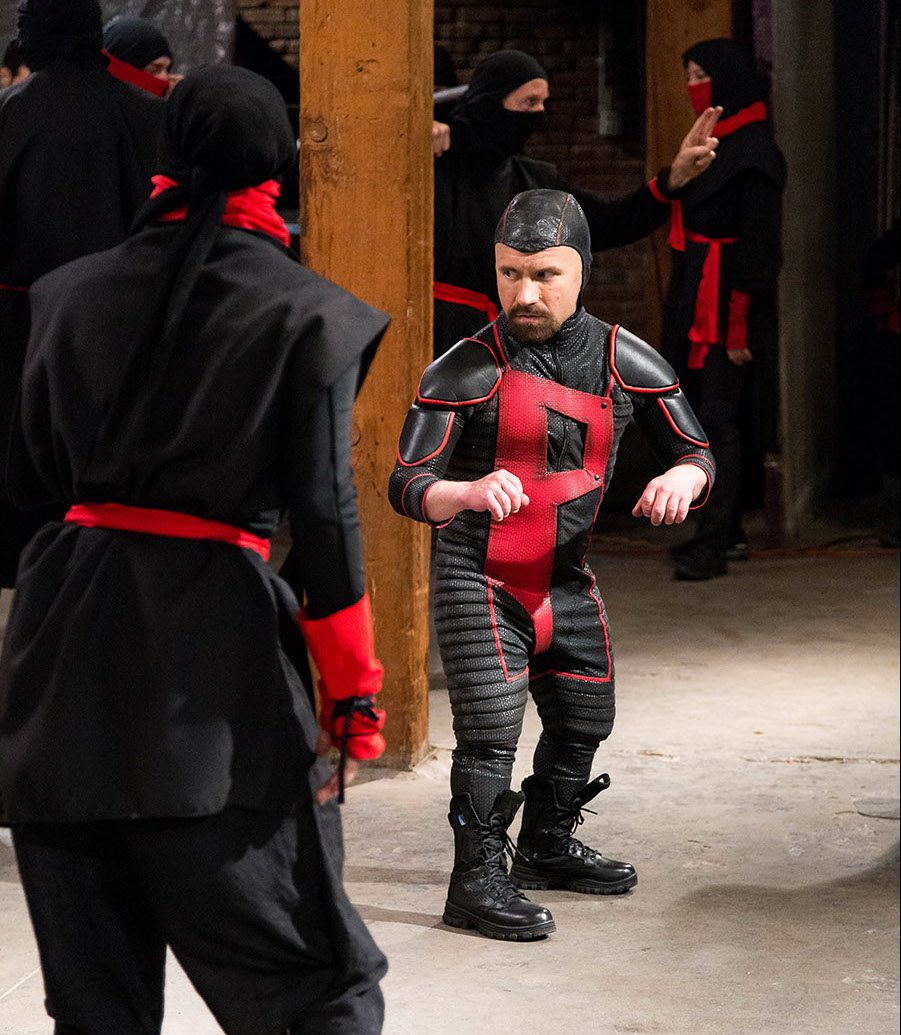 Brian Danner: “I would be surprised if they didn’t. It would be nice to get anointed into the full-on canon of that character.”

Michael Parker: “When people say our film is canon, that is great respect and we take that. The best is when we get these comments like, ‘I was literally having the worst day of my life and I watched this and I’m happy again.’ That’s when we’ve really done our job, because at the end of the day making you smile was our goal.”

Brian Danner: “It’s really amazing when we get those comments. I can’t think of greater praise because it is a real genuine thing. Being a huge pop culture and comic book nerd growing up, the cosplay community is so generous when it comes to supporting things and people that they love. I’ve seen so many wonderful interactions of people who are all shapes, all sizes, all ages, all colors, all creeds, and all orientations. It’s very humbling.” 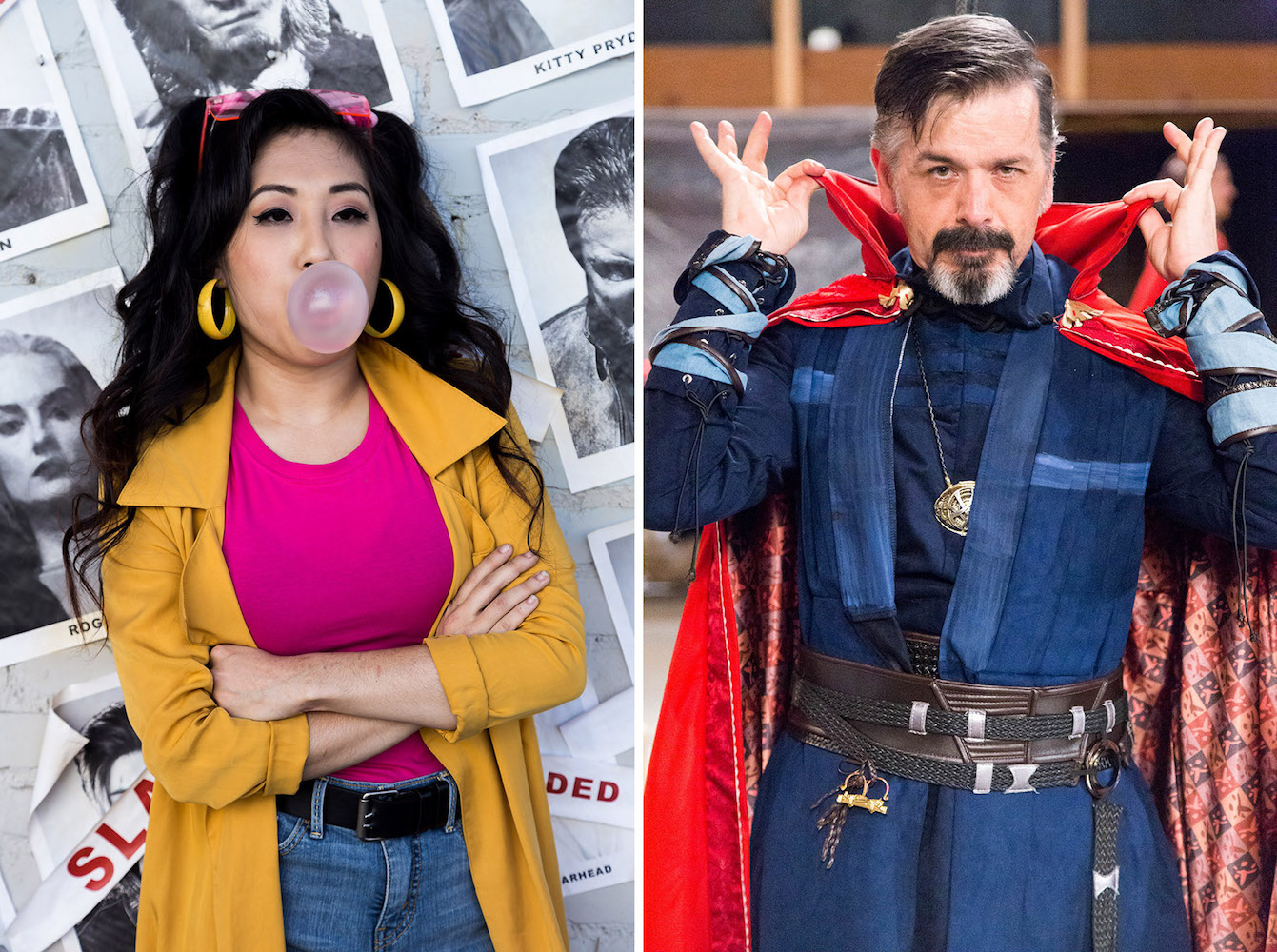 Talk turned to other favorite aspects in making the film, such as seeing all the costumes come together for the first time.

Michael Parker: “When we got two weeks out we went down for a costume fitting and dress rehearsal. We had three Deadpool suits, the Iron Man suit arrived, which was 3D-printed special for us, and Elliott put on his Nick Fury piece. Then all the stunt folks show up in their Merc outfits and start rehearsing for the first fight scene, which is the first time we’re seeing things live. 20-30 people all dressed as Mercs and I’m in my Deadpool suit, and we had Adam and Julian there as well, all in their suits. It was absolutely phenomenal.”

Julian Higgins: “One of the most iconic memories for me on our sequel, other than somehow managing to accomplish an incredibly daunting production schedule with our amazing cast and crew, was watching Brian Danner work on Day 2 of production. Knowing the X-Men was a personal favorite of his, seeing him work with all of our fantastic cast in one of our huge fight sequences, and hiding great characters in the Morlocks, played by Sword Fights, Inc. The ultimate was watching him prepare for his Fastball Special stunt with Jenny Van Dien. I felt like I was looking at a childhood dream come true as he screamed through the air, take after take, loving life. Truly gratifying. At its core, those moments of pure fandom is what make the entire thing so magical.” 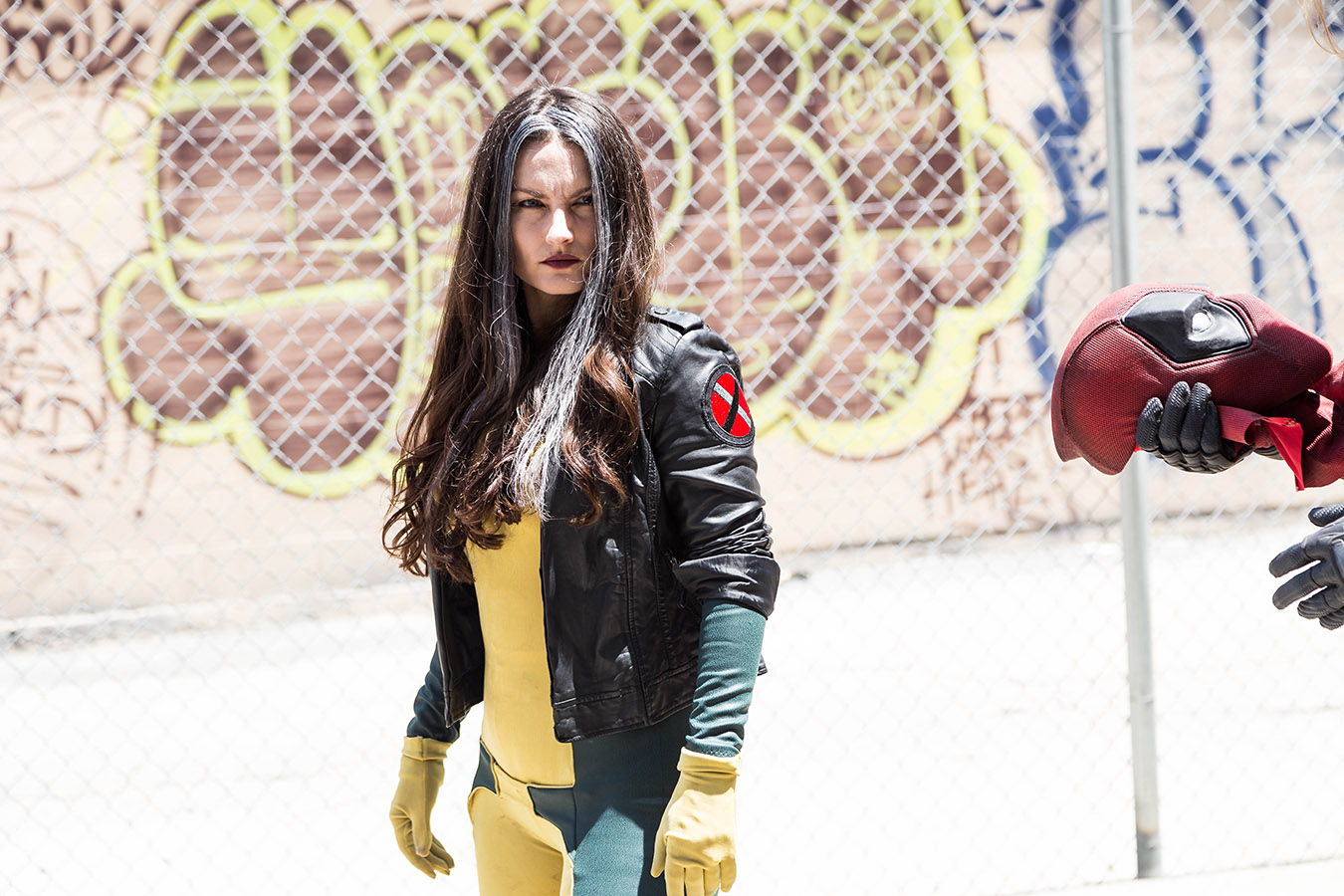 Michael Parker: “My favorite story is that as we’re doing the ‘Be A Team’ scene, there was this young girl hanging around that I figured was some young daughter or sister. They yell ‘action’ to go into the fight, and out of nowhere this little girl steps in and takes down seven ninjas. I’m looking with my mouth agape, I have no idea what it is. Brian walks up to me and says, ‘X-23. Merry Christmas, early’. And he had snuck in X-23 which was incredible.”

Brian Danner: “Kate Tomlin is the actress’ name. That’s her doing all her own aerial cartwheels, her own kicks. There’s no adult sized human that is digitally shrunk down, that’s all Kate. The Tomlin family are friends from a long history of live stunt shows that I put together, where we would give all the proceeds to the Make-A-Wish Foundation, and put the Make-A-Wish kids in the show. The Tomlin family’s first two children were in shows with me, but by the time Kate was old enough, we’d moved past those shows, so I owed them one, and we snuck her in as X-23.” 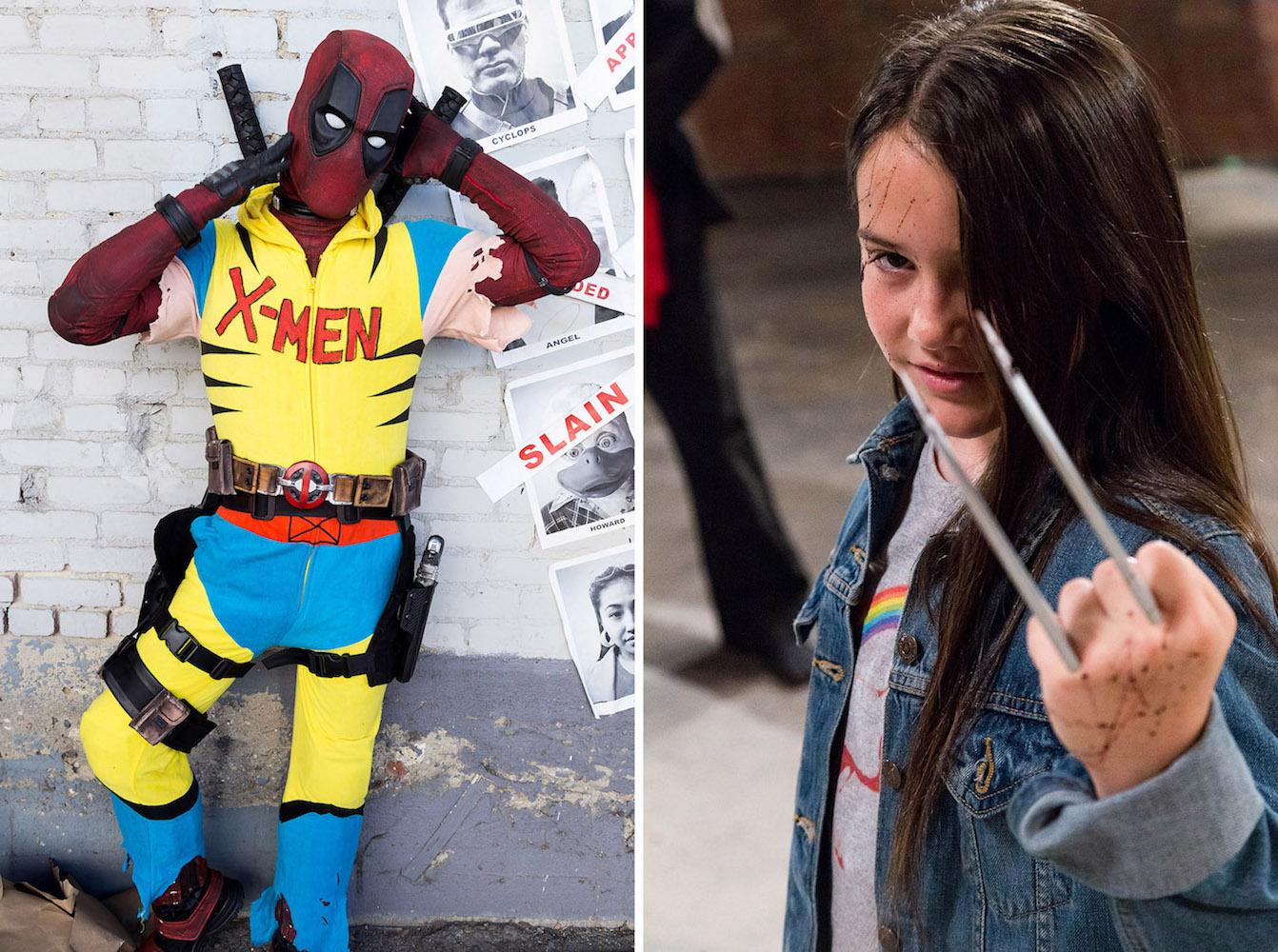 And of course we ended by discussing the two hilarious and brilliant after-credits sequences, riffing on Avengers Infinity War and Age Of Ultron.

Julian Higgins: “We were less than a week away from production when Infinity War came out. I was hoping like hell there would be some fun reference we could integrate into our musical, even if it was something small. Of course, the ending of that film absolutely broke the internet and it’s all fans could talk about.  So I thought, ‘What would Deadpool do?’ There was never even an official script page for that scene, I literally just tapped it out and realized, ‘It’s only two shots, we gotta do this!’ I was very thankful Michael and the rest of the team dug the wonderfully Deadpool ‘wrongness’ of it. Brian cooked up a great line for Deadpool that we added, and Paul added some characters that weren’t confirmed ‘dusted’ just to screw with fans, like Iron Fist and Pepper Potts. The whole scene was a perfect, last-minute team effort and I think one of the best moments in the whole piece.” 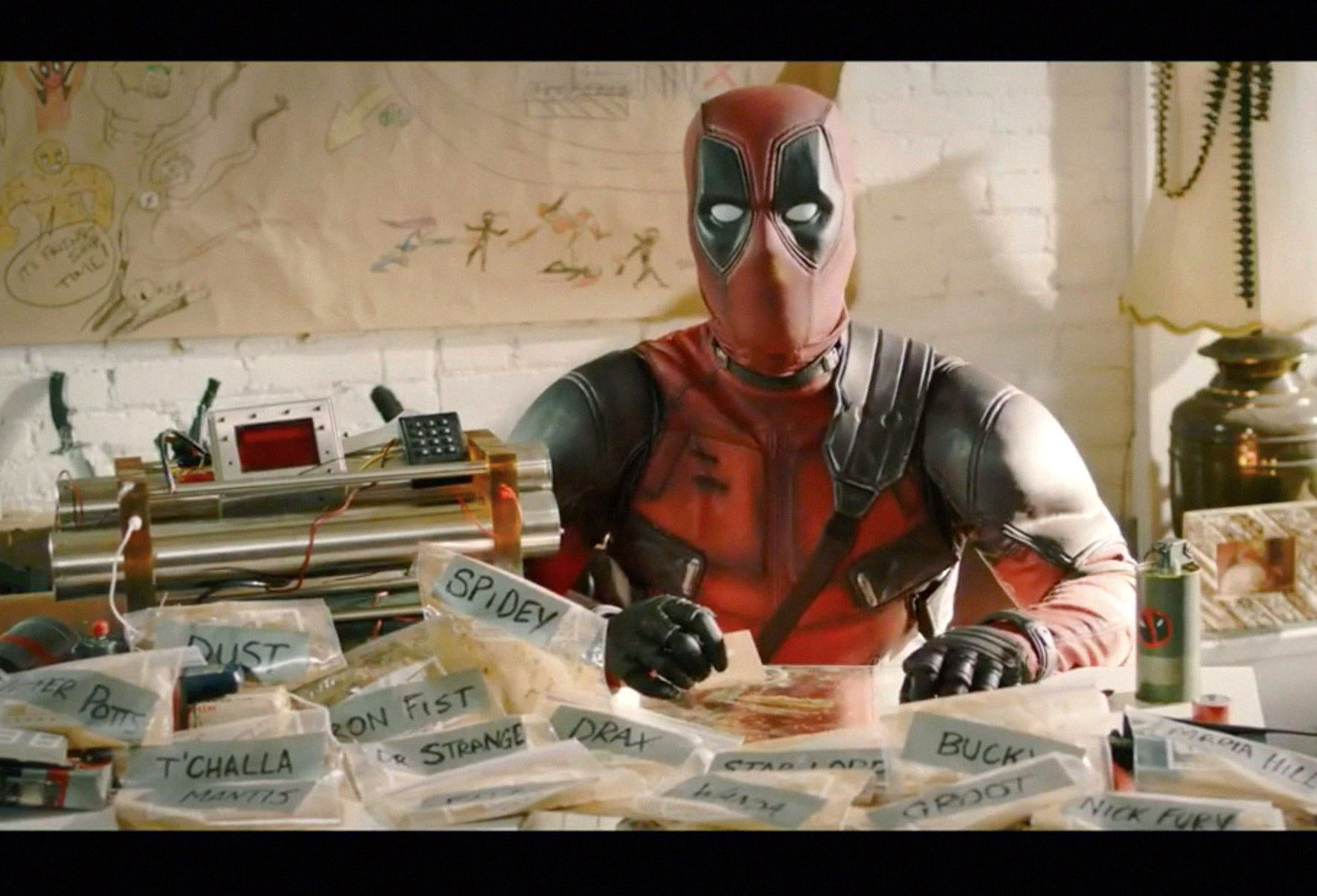 Michael Parker: “We had one massive after-credits scene that we realized pulling off was going to be logistically problematic. Julian pulled me aside before we started rolling the cameras and said, ‘I have an alternate end credits scene, but it would ruin Infinity War for you’. All agreed it was brilliant. And some of the comments I love are: ‘Oh no they didn’t! They didn’t just go there — it’s too soon!’”

Brian Danner: “The end of Age Of Ultron is my favorite stinger for all of the Marvel movies, where you see Thanos and the gauntlet. I remember being in a packed house and fans just going nuts for that. So when we were looking at Paul and Aaron Higgins to build our Infinity Gauntlet fleshlight, the line just came to me: ‘Fine, I’ll do it myself.’ That was a gift from whatever you believe in. We shot that about a week or two after we wrapped fully from the 5 days.” 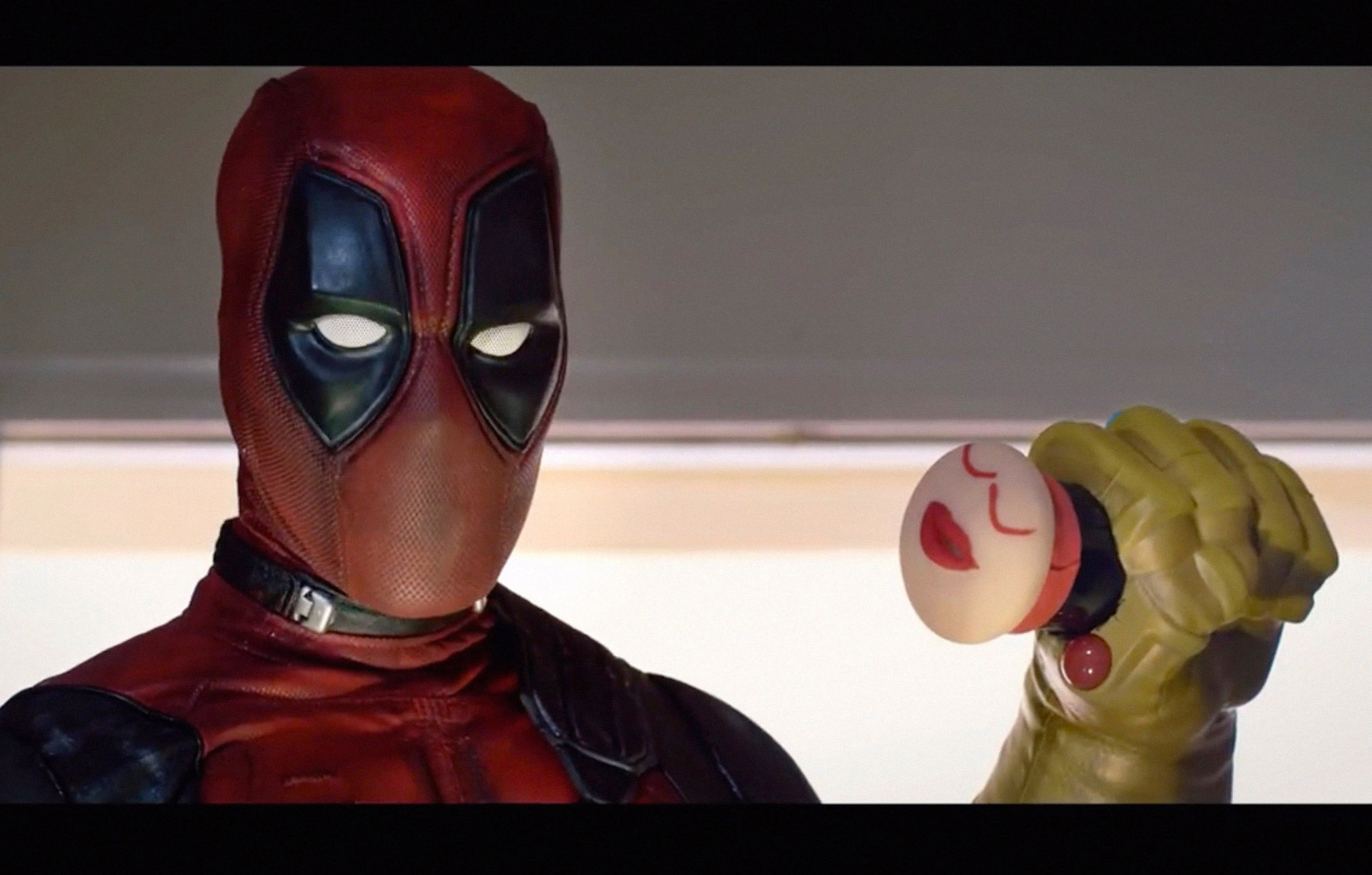 Michael Parker: “This was my barometer: would I smile on my deathbed about this? And the answer is, yes!”