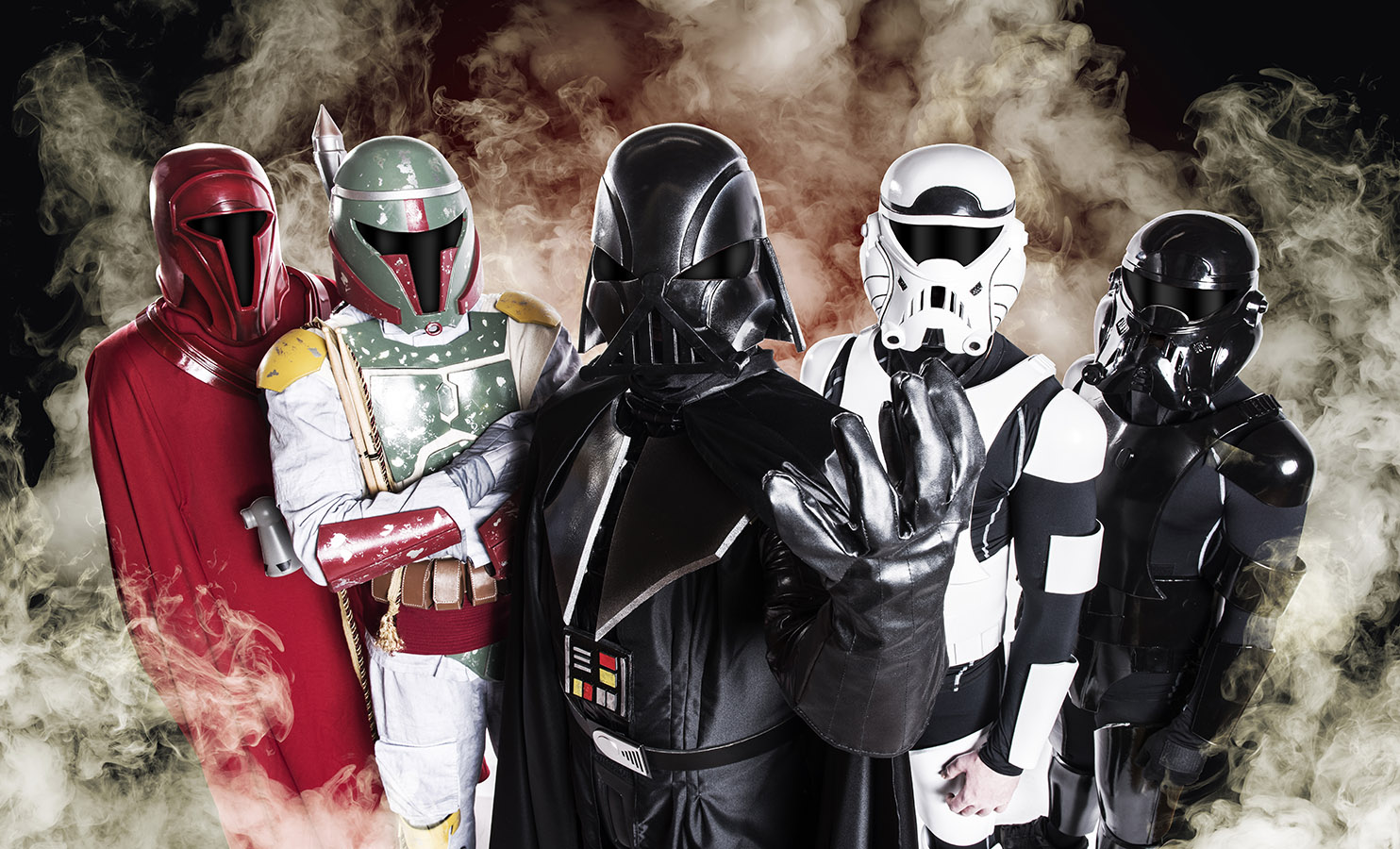 While the music from Star Wars is now so iconic it’s practically part of our genetic code, who knew the film scores would lend themselves so well to Heavy Metal arrangements? Why, anyone with an ear, no doubt —— so it should come as no surprise that Galactic Empire has been playing just that for the past few years across the country and Europe. In full Imperial costume, they perform classic pieces from John Williams’ iconic soundtracks, carving out a big fanbase of Rebel- and eardrum-crushing sounds in the process.

Originating with a 2013 YouTube video based around a drum version of The Imperial March, the band came together over rearrangements for heavy metal guitar. After numerous gigs, Galactic Empire released its first studio album in 2017 on Velocity / Rise Records.

CCM spoke with “bounty drummer” Boba Sett about some of “the most feared villains in the galaxy” just before a Halloween gig in Philadelphia. Along with Dark Vader on lead guitar, Bass Commander on bass, and Shadow Trooper and Red Guard on guitar, the band continues their pursuit of complete and total musical domination… 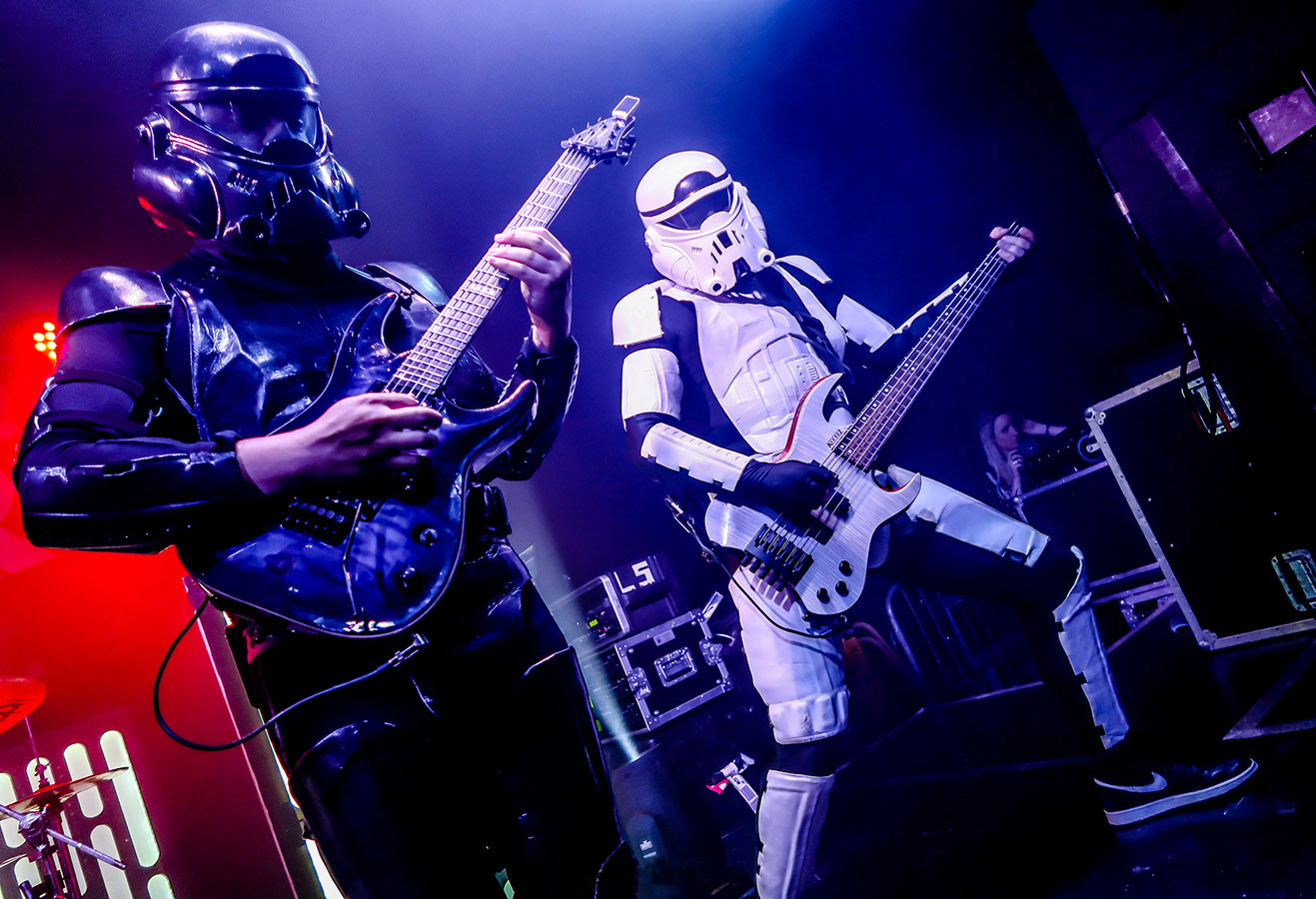 What was the impetus for crossing Star Wars into the metal realm?
The heavy metal/progressive arrangements translate very well from the original John Williams orchestration. And because we’re the bad guys, of course we have to play heavy metal.

Are you all graduates of the Imperial Academy?
The Emperor hand-picked this group of individuals specifically for this task. His decision-making supersedes all known heavy metal prerequisites. 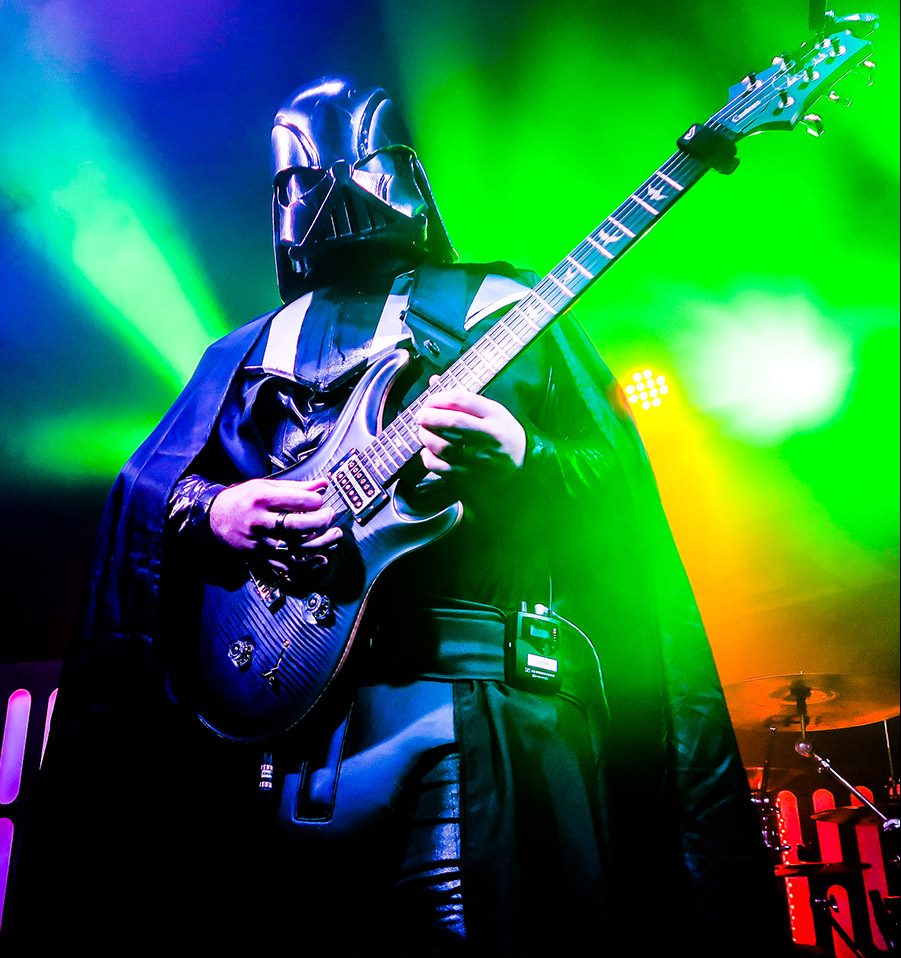 What musical backgrounds do the members come from?
Bass Commander and I own and operate Atrium Audio, a recording studio in Lancaster, PA. We produce mainly rock and metal bands. Dark Vader and Red Guard have a metal band called Alustrium, and Shadow Trooper has a metal band called Unparalleled Height. We just tried to pick a group of friends that all get along, and are also great players. At the end of the day, as long as we’re having fun and playing the best we can, that’s what matters most. 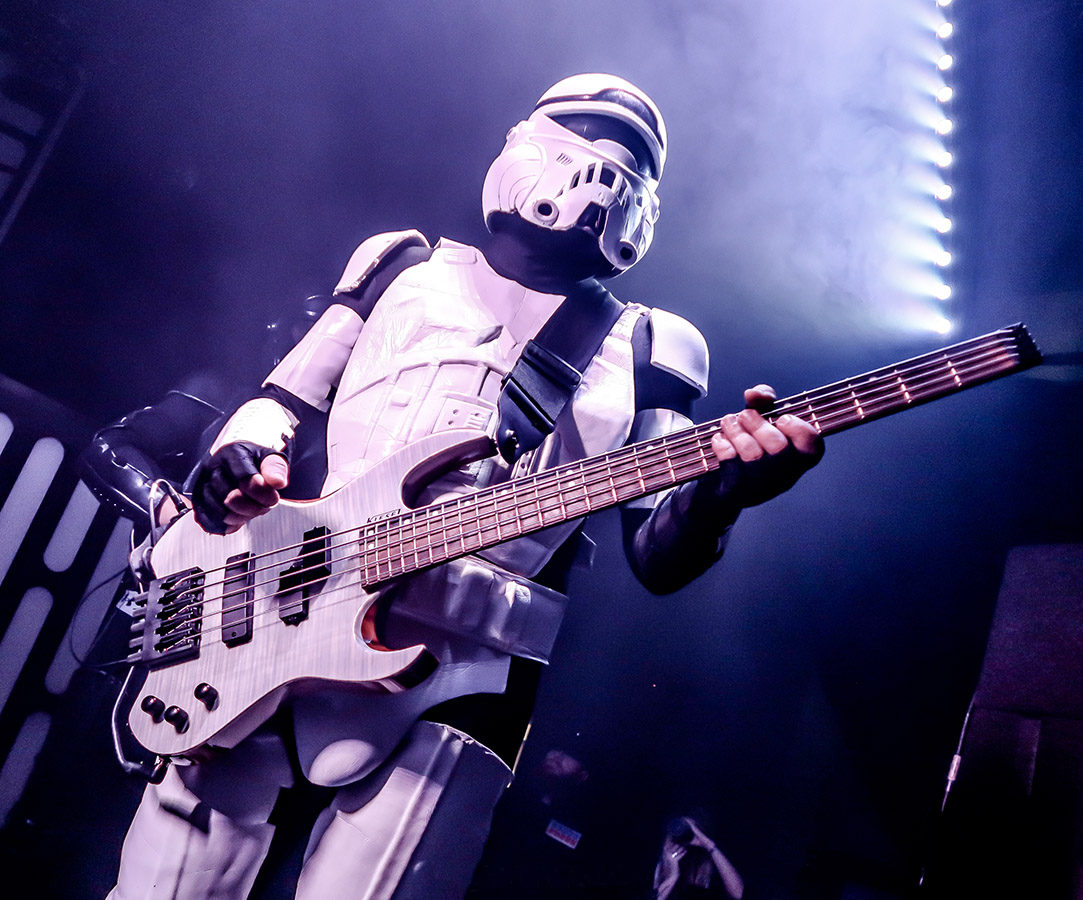 Which members of the group are responsible for the uniform fabrication?
Bass Commander makes all of the armor and helmets. His mom awesomely sews all soft items. Materials used are 1/4″ Cosplay Foam, Plasti-Dip, and spray paint. 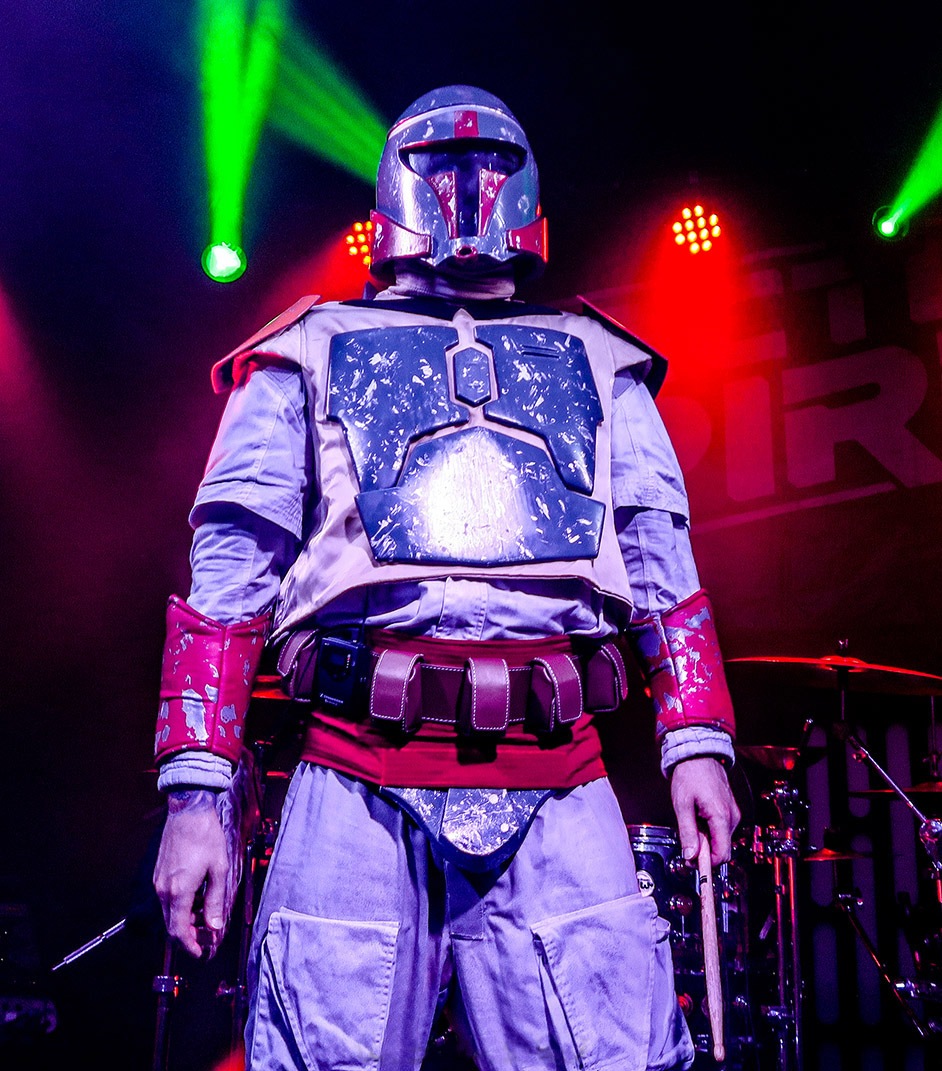 How difficult is it to perform sets in full costume?
The costumes were redesigned to allow for more fluid movement and playability. It’s not easy, but it’s also a lot better than trying to use the original movie quality costumes. The cool thing is that people who love Star Wars and people who love metal, but maybe not both, will all come out. It creates a broad range from parents bringing their 6 year olds to young adults, and not just long-time fans or metalheads. 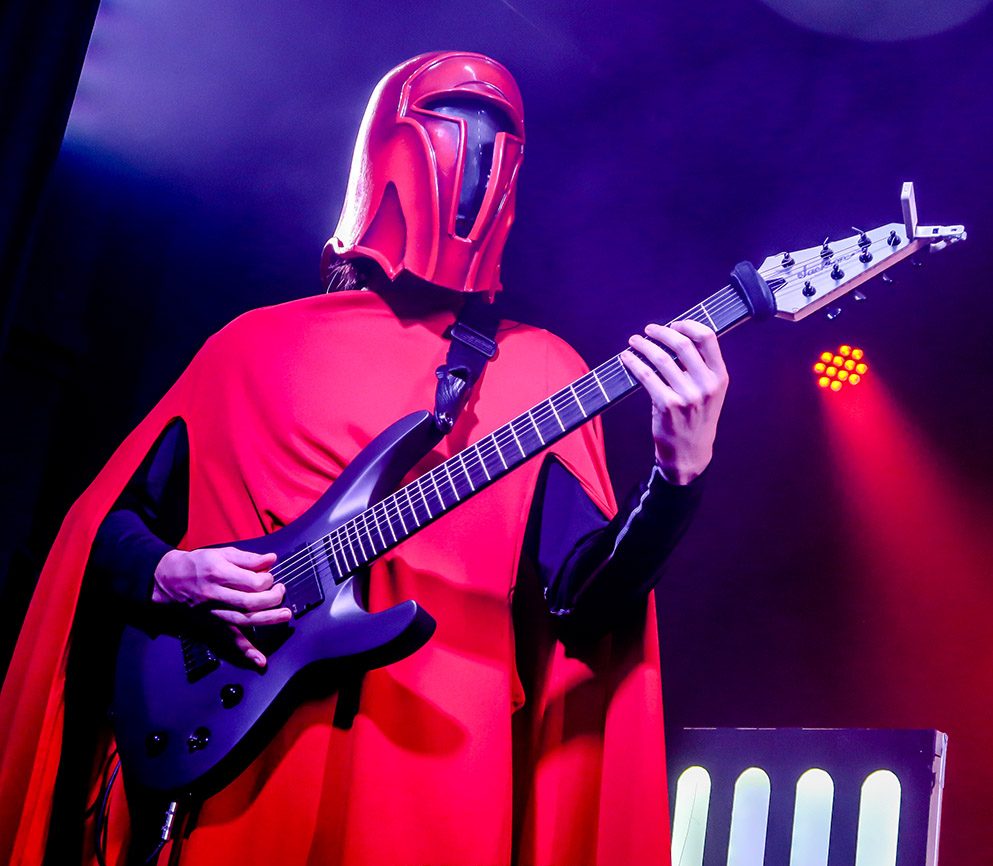 What has been the strangest gig you’ve played?
One time we got booked at a strip club in Kentucky. It wasn’t the right fit for an all-ages, family band. However, we did play in Haarlem, Netherlands. Halfway across the world, sold-out show, and the 501st Stormtrooper Legion showed up with a lot of members. It was a blast. 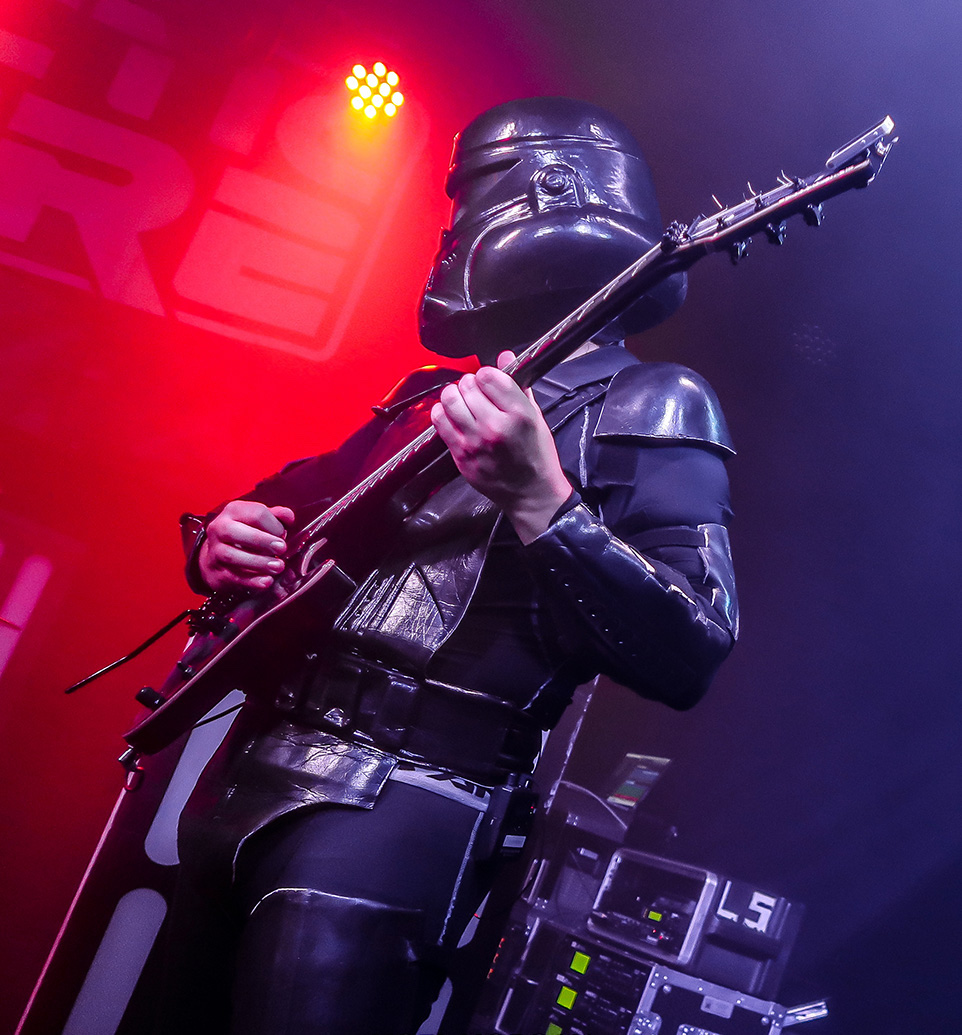 Is the European reaction any different from the US?
It’s actually very interesting playing in different countries, or even just cities within a country. Everyone has their own reaction. Some people just stand and smile in amazement, and other crowds are more rowdy and go nuts. Either way it seems like everyone is genuinely enjoying their time and having fun, which is what matters most!

How often do cosplayers show up to gigs in full SW regalia?
Every few shows we get people that show up in costume. It’s great, we encourage it and want to see the fandom continue to grow! We all clearly love Star Wars, so it’s just a great time to be had for all. 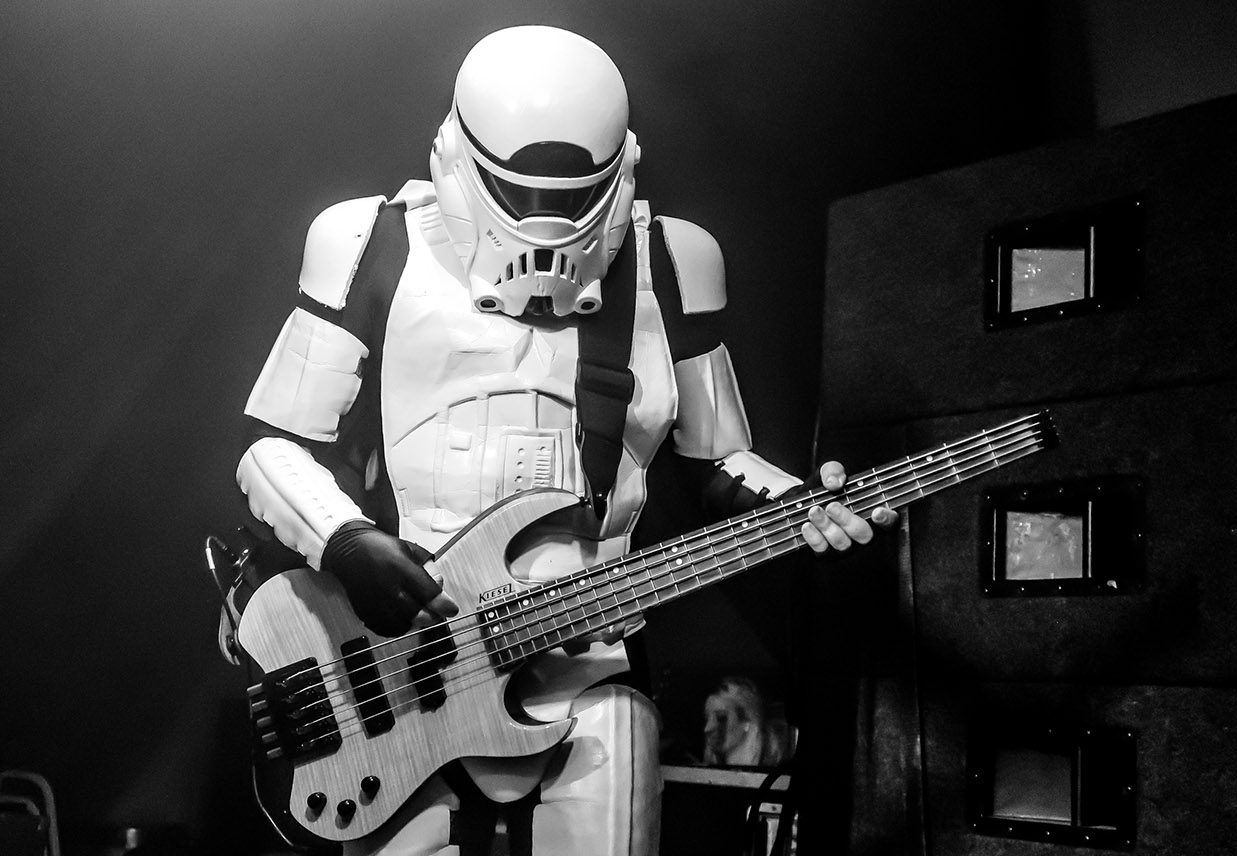 Are there any conflicts over what songs to adapt?
I’ve just tried to listen to the score and remember the moments that impact me the most, and use those themes. Everyone typically is in agreement, and we haven’t had a difficult time deciding on songs.

Do you ever have to force choke other members?
Never force choked a band member, but we do force choke a selected member from the audience at every show. 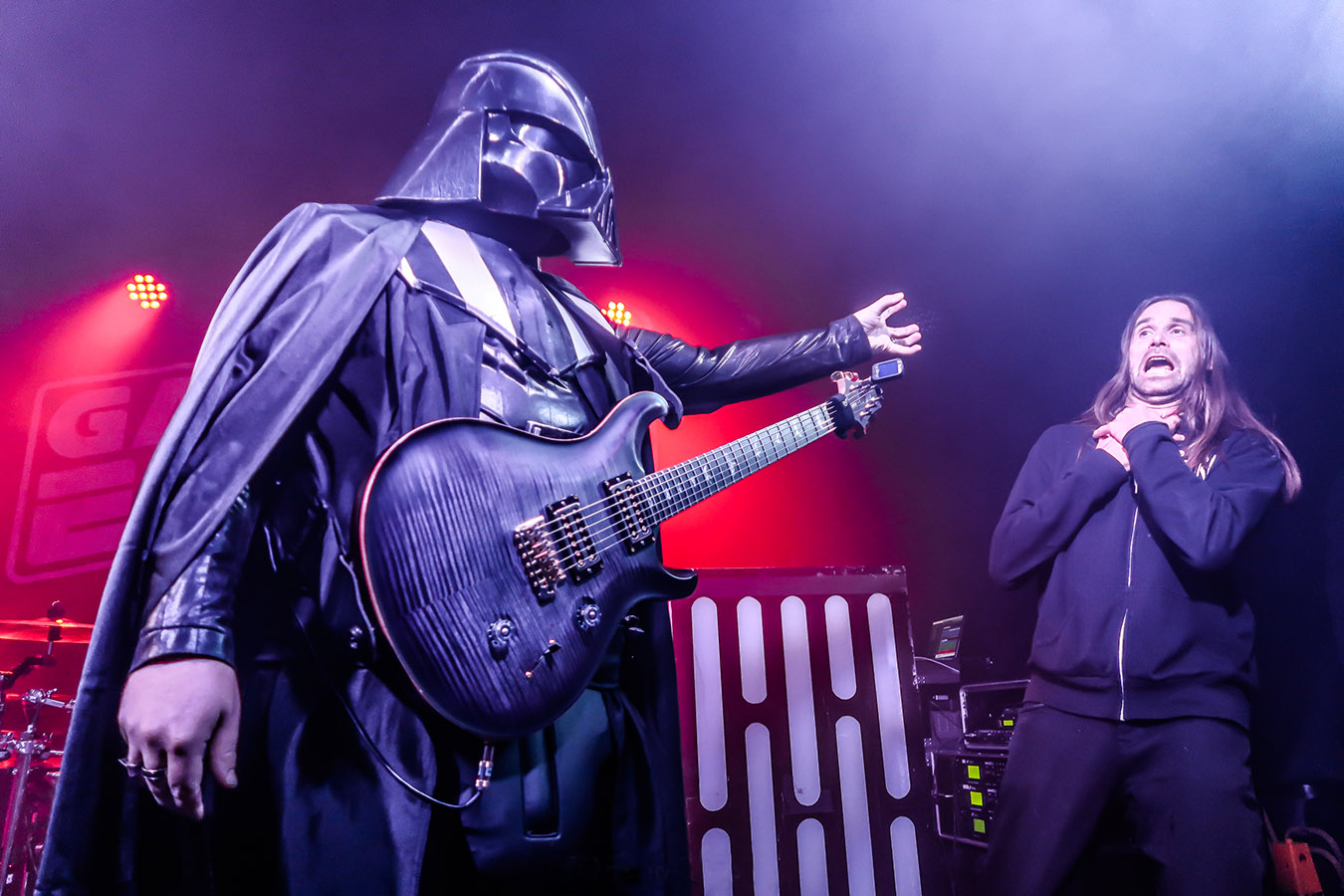 Has anyone ever faced the Emperor’s displeasure?
Yes, unfortunately the Emperor had to use force lightning to kill Red Guard during our Imperial March video shoot. However, the Royal Guard are a dime a dozen so we quickly found a replacement rhythm guitar player.

Is Music the thing that surrounds and penetrates us and binds the galaxy together? That is, is Music the true actual Force?
Perhaps. Maybe the Force Theme is the actual embodiment of this mysterious, non-tangible power. I don’t think the Force would mean as much if John Williams hadn’t given it such an iconic, memorable motif. 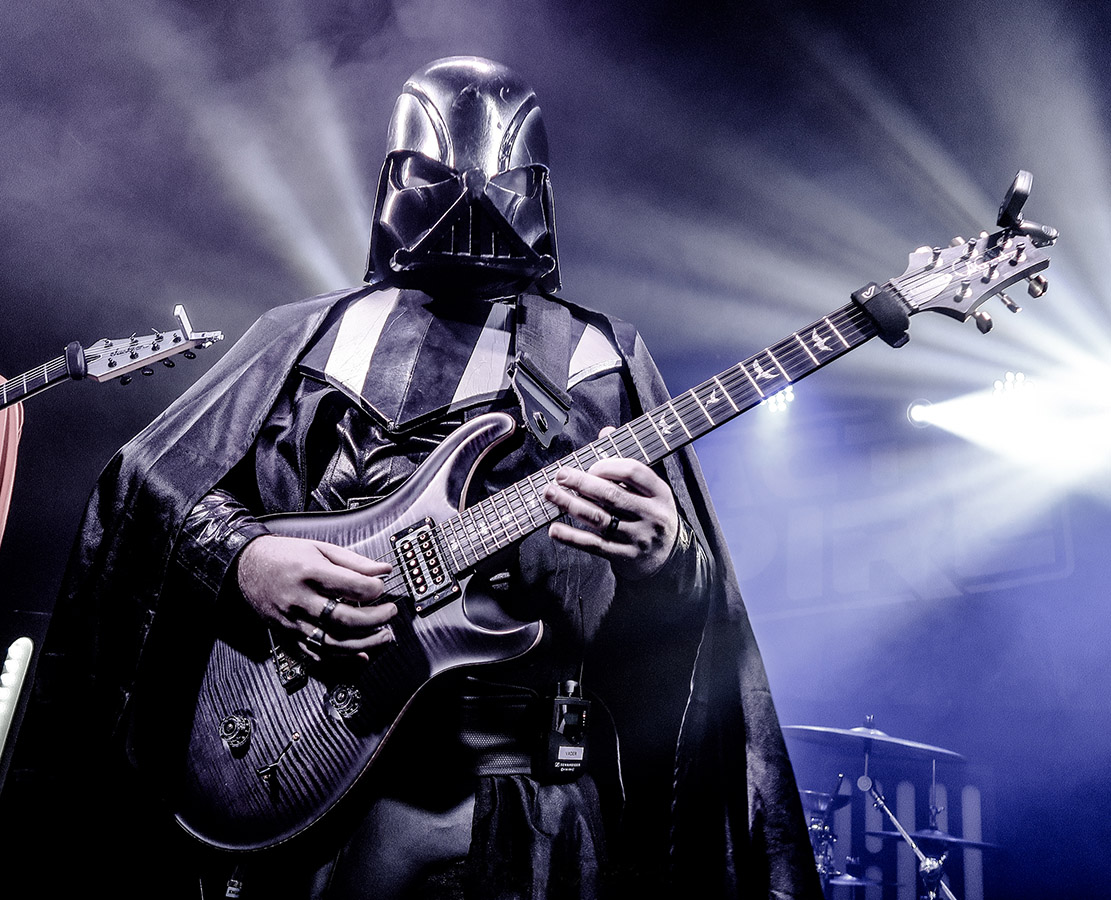 Are there other bands you play with that are in the same musical realm?
That’s a tough call. Maybe you could consider a band like Mac Sabbath (McDonald’s cosplay Black Sabbath cover band) a similar genre? Maybe we should play some shows with them. Blue Man Group or Trans-Siberian Orchestra would be awesome. 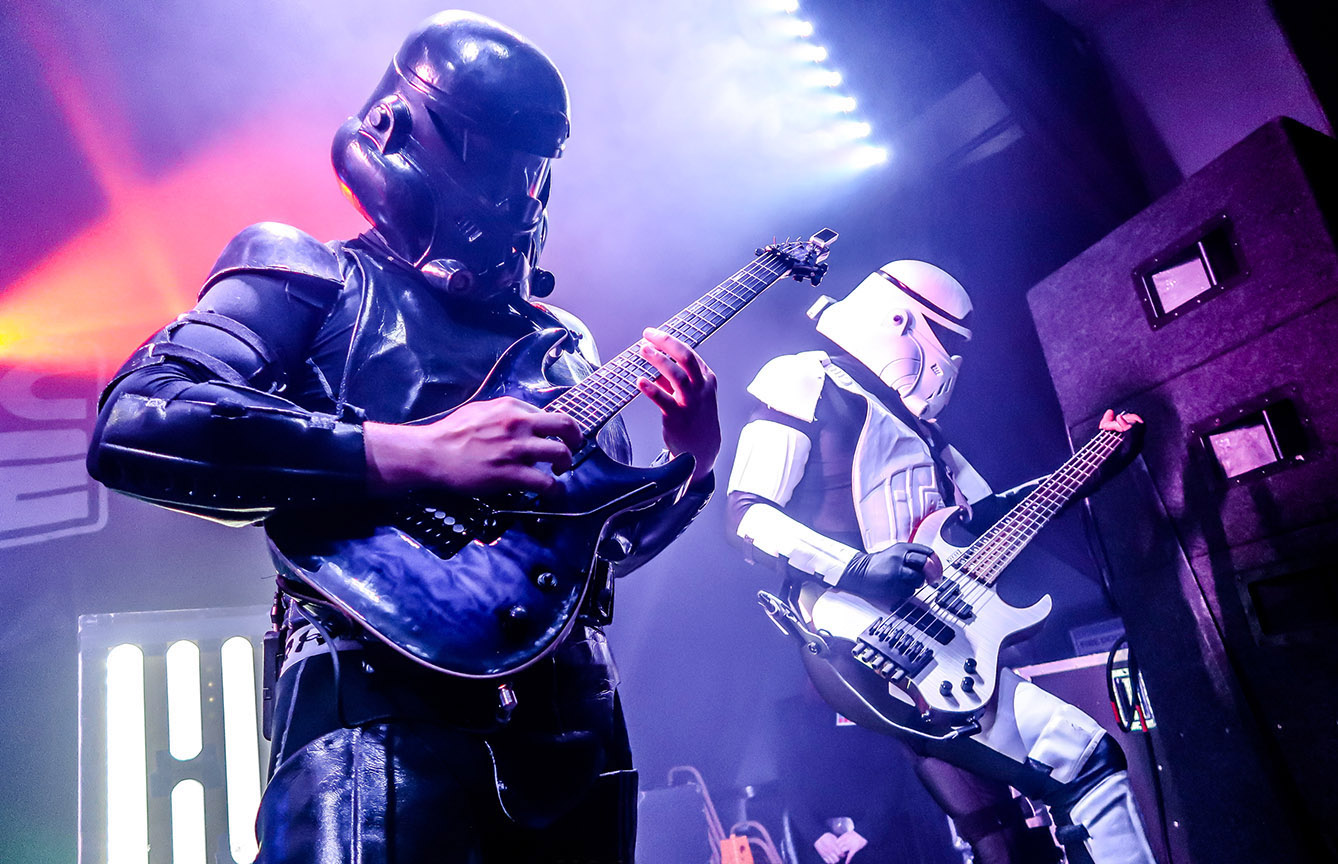 What are your future plans for galactic domination?
We will continue with a second album, more music videos, tours, and galactic domination by way of crushing heavy metal. As of now, and probably always, we will remain a John Williams cover band. Maybe we will play Indiana Jones, Jaws, or E.T. in the future!