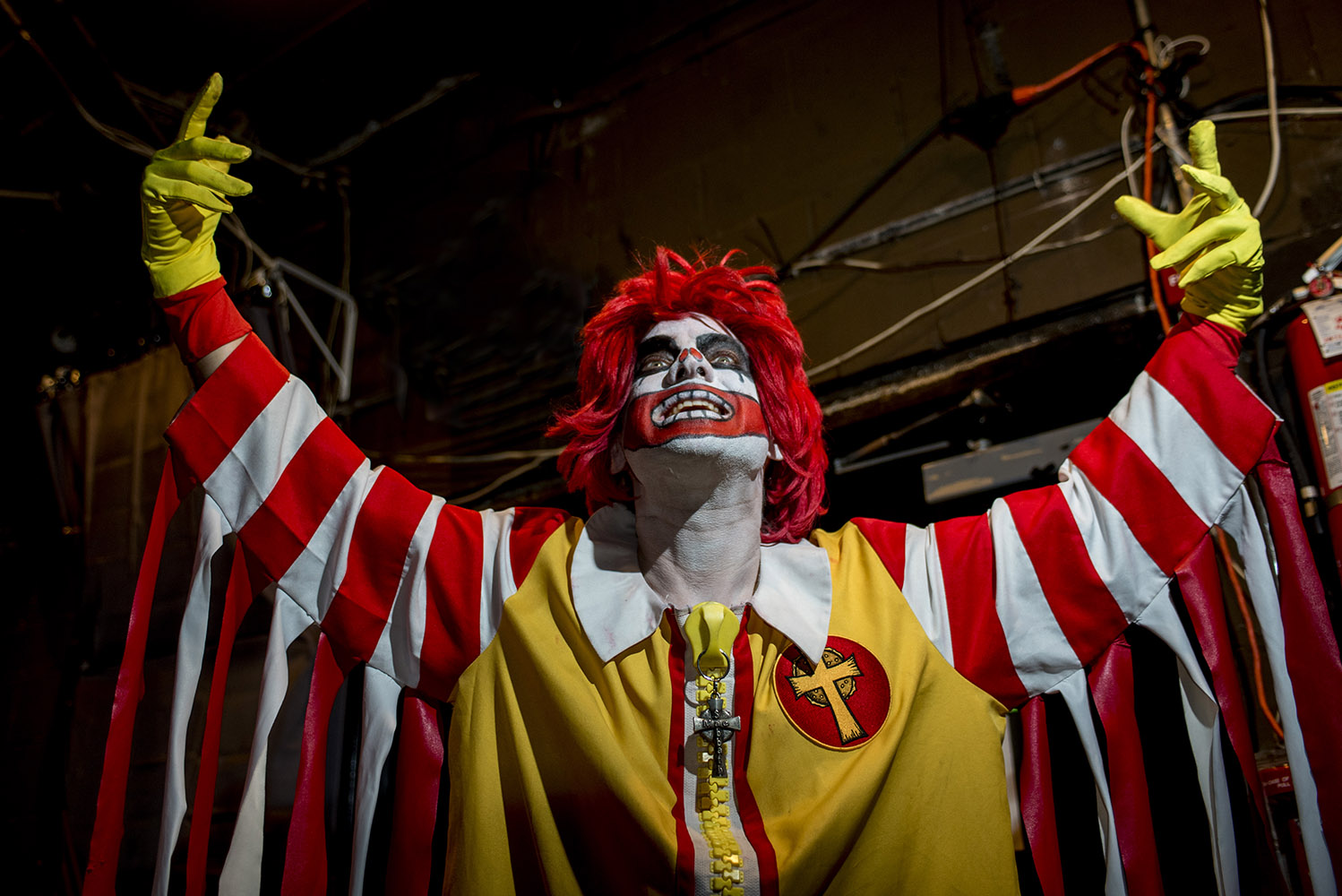 To see the musical tribute/parody band Mac Sabbath is to feel you have somehow slipped into a parallel world, a world where heavy metal was created in the early 1970’s by fast food pitchmen, and where family-friendly media icons look considerably more diabolical.

The inspired concept of Mac Sabbath is ridiculous and brilliant, perfectly blending the heavy rock of Black Sabbath with cute restaurant characters, warping both into a new genre the band calls “Drive Thru Metal”. Singer Ronald Osbourne and Co. lay out their self appointed mission to warn against the evils of fast food domination through songs like “Sweet Beef”, “Pair-A-Buns”, and “Never Say Diet”, employing props like flash-pot grills, giant straws, laser-eyed clown heads, and huge inflatable hamburgers. Beyond the joke, the band is seriously competent, as guitarist Slayer MacCheeze, bassist Grimalice, and drummer The Catburglar expertly recreate Sabbath classics even in elaborate and impressive costume. Audiences leave grinning ear to ear, stunned and ecstatic.

Mac Sabbath was catapulted to sudden massive exposure when their Youtube clip of “Frying Pan” was re-posted by Black Sabbath themselves on their own site, leading to high profile shows such as England’s Download Festival, among the likes of Kiss, Motley Crew, Judas Priest, and Slipknot. Coming from Los Angeles, CA. in 2014, the band prefers to let their songs speak for them, and communicates through their manager and spokesman Mike Odd, himself a vet of LA shock rock band Rosemary’s Billygoat. We spoke with him at some point during the band’s current Clown Power Tour… 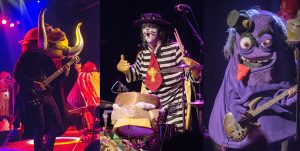 So what’s worse: scary clowns or fast food?
I think how scary clowns are is a good representative of how scared you should be about fast food.

Now that Black Sabbath is ending, does the band feel like they were chosen by fate to carry on the tradition?
Yes, Black Sabbath is in the middle of their “The End” tour, but for Mac Sabbath this is just the beginning!

How did the group come together? We understand Ronald is some sort of time-traveler.
Yes, it’s still a mystery to me. I met this guy off an anonymous phone call — I used to run this freak museum and would get all kinds of weirdos calling to get me to come down and look at whatever their oddity was. So when I was asked to go out to this burger place, this crazy clown just blew me away with this whole concept, that he’s travelled through a time-space continuum wormhole to save us all from the current state of sustenance and music, and bring us back to what real rock was. Rock and food was real up till the 1970s, that’s his whole thing. He sort of remains mysterious and anonymous — we travel around in his van, and he just pops up at the venues. I’m still trying to figure out the whole thing! 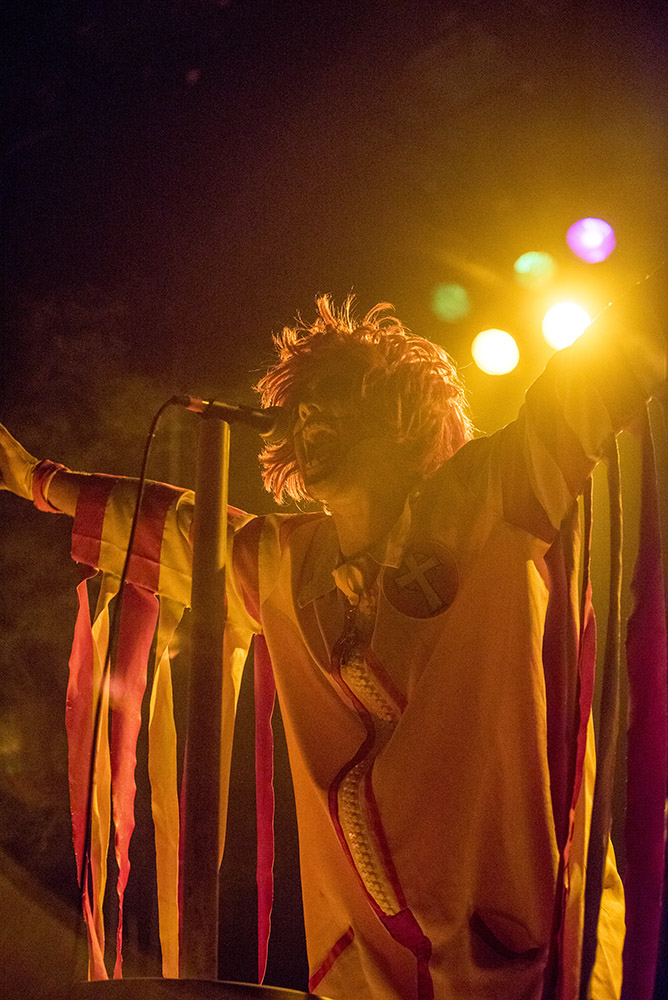 Who does the costume fabrication? What’s involved in creating it?
What costumes? Ronald’s look is all his own! The merch on the other hand, I do have a hand in. The cross is made by my company, Monster Buckles, creepy belt buckles and other metal jewelry.

So there’s no dry-cleaning after shows?
Well, maybe for the audience! 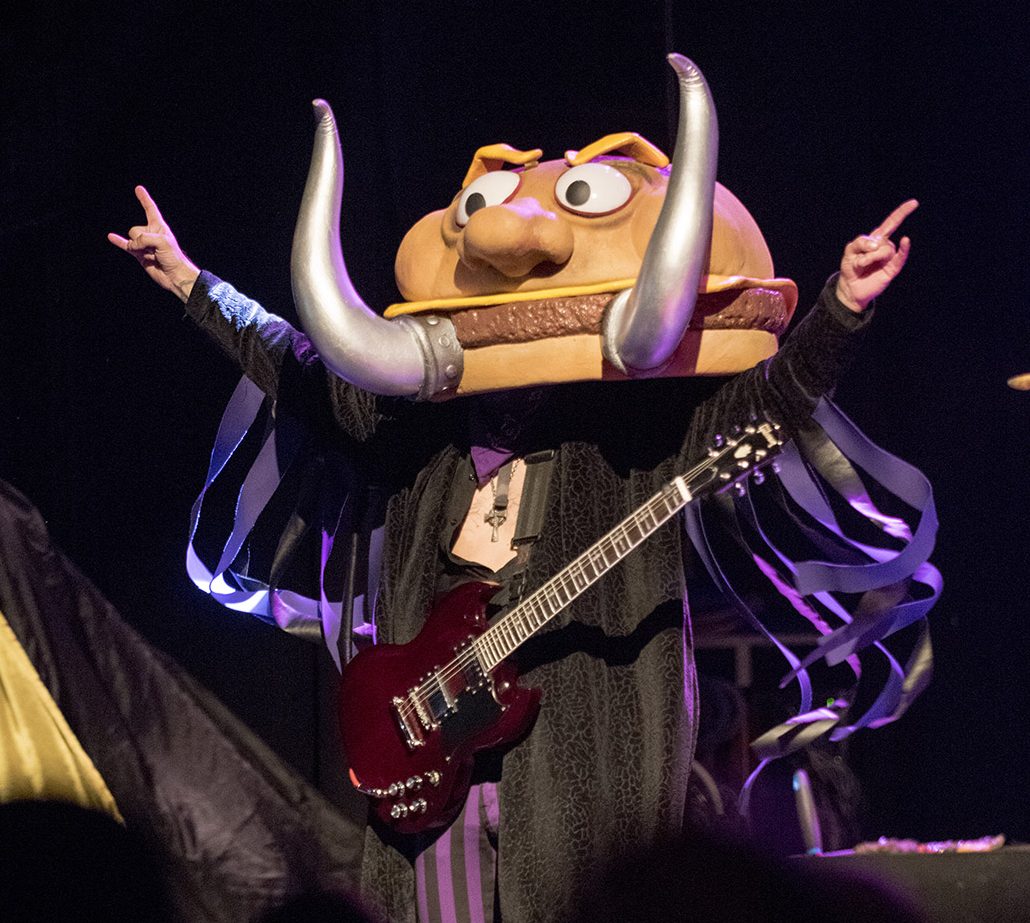 Why do you think we’re in a moment where Ronald the Clown is suddenly appearing everywhere — in the cosplay world, he is showing up as mashups with Thor, the Joker, Final Fantasy, etc. What does that say?
I don’t know… I guess the band’s more popular than I thought! But I take no responsibility for it! 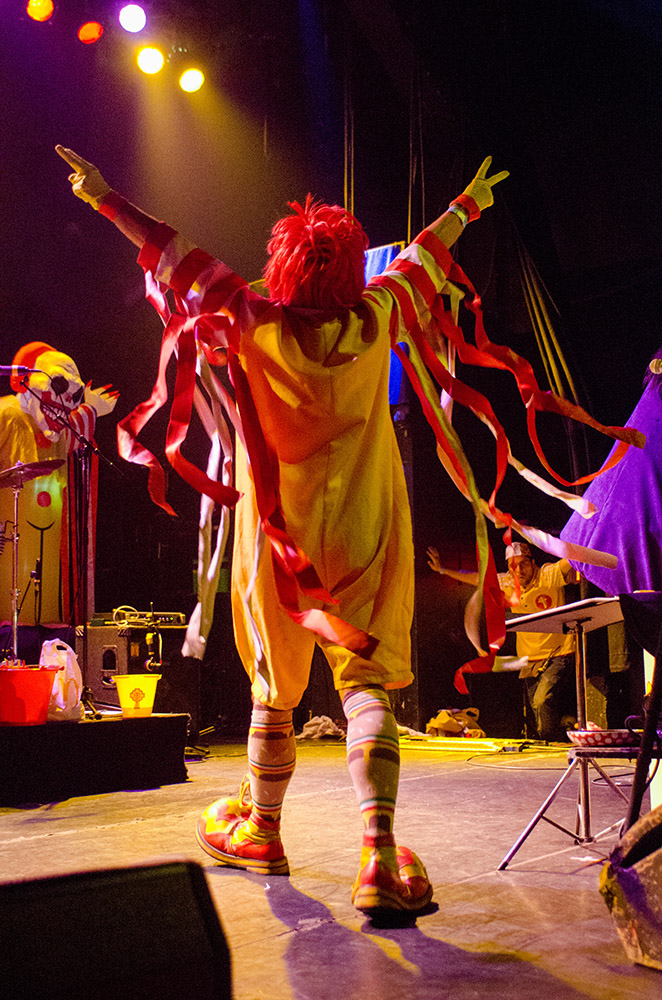 Cosplay is similar to a tribute band in that both pay homage to a character while being inspired creatively — especially as they take liberties with the design. Is the band honoring both its influences?
Absolutely, for Sabbath, and there’s definitely some affection for the characters, a sort of a love-hate thing with them.

Any thoughts on giant fast food chains and US global consumer imperialism?
That’s part of the whole idea, why this band is so cute and scary at the same time: these adorable characters that we hold near and dear to our hearts are actually scary. They’re hooking in kids with these amazing adorable images that we watch so much, controlling and enslaving them through adulthood. It’s like Black Sabbath was always thought of as this evil band, yet when you broke down the lyrics you could see that they were really warning you about evil. And this is the same thing — when you look at the lyrics it’s all about warning you of the evils of fast food. It runs deeper than food: multi-national corporations teaming with a one-world government enslaving us on a general mental level, as in our song “Chicken for the Slaves”. 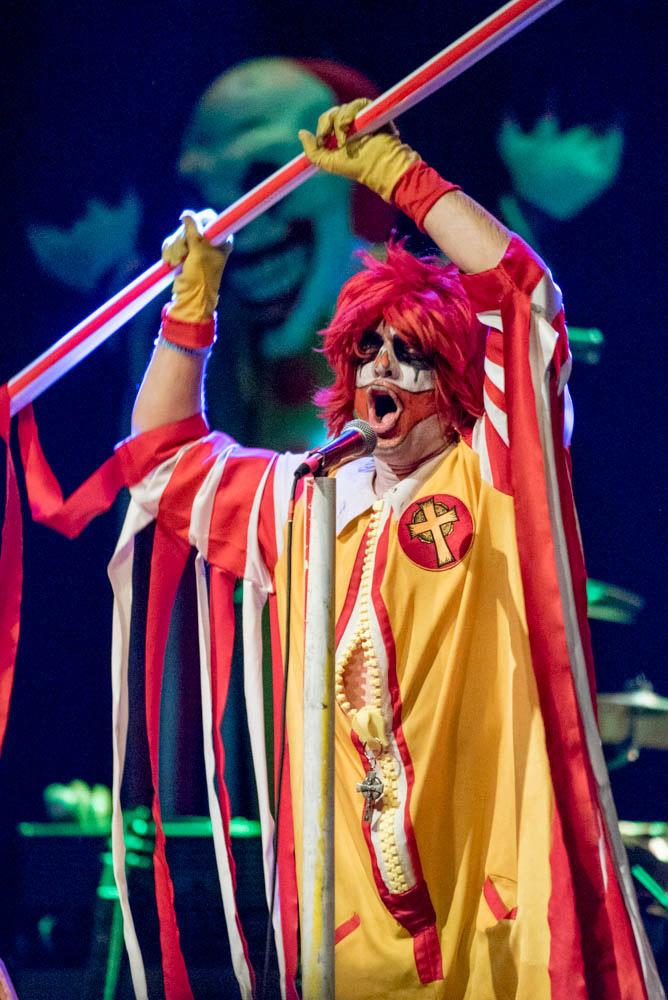 So the band is a sort of musical Public Service Announcement?
I guess you could say that. No one ever put it in those exact words, but yes, it is some sort of gastronomical PSA.

How is the band received in Europe? Do other countries enjoy the satirical look at corporate food culture?
Well, so far they have only toured the UK, and the reception was overwhelming. But since Ronald claims they hail from “Birminghamburger”, England, perhaps that helps. One of the first shows I booked for the band was at an elementary school Halloween party in Silverlake, CA. I think its great that this band can be so wicked and still remain kid-friendly. I know it’s important to Ronald to keep it that way so the kids can receive the message as well. So far they seem to get where he’s coming from more than the adults. 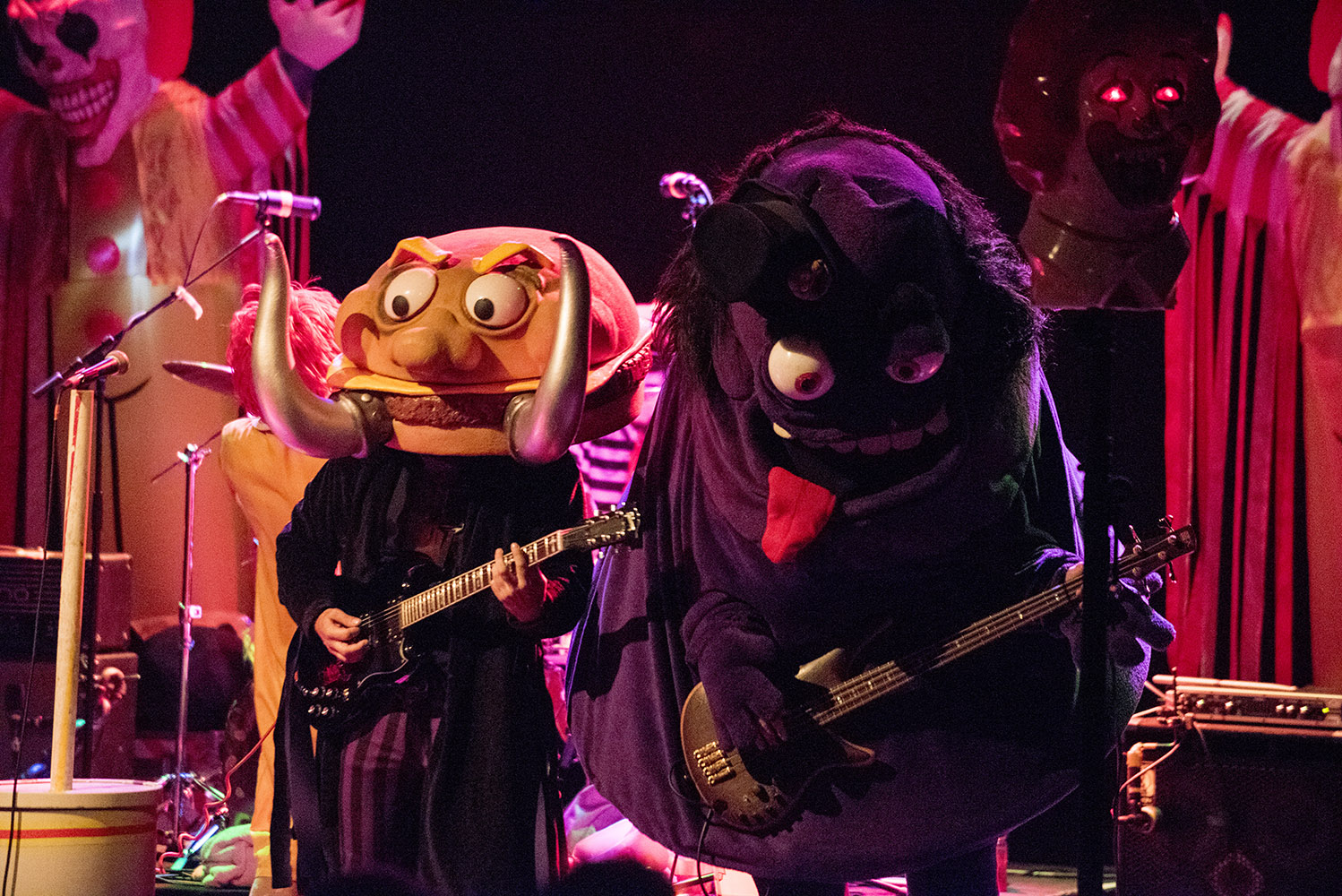 Aside from your tour mate Clownvis Presley, do you see the band playing with other costumed-type groups?
Ronald seems to have a bond with clown culture. And we have an upcoming tour with heavy metal mariachi band Metalachi and Okilly Dokilly, a Simpsons-based hardcore band.

What other developments are in the future for Mac Sabbath? More elaborate props or sets? Will the band expand its musical material to original songs?
That would involve getting into Ronald’s brain, not a place I want to be! Either way, I think that rock audiences appreciate a meaningful message no matter where it comes from. 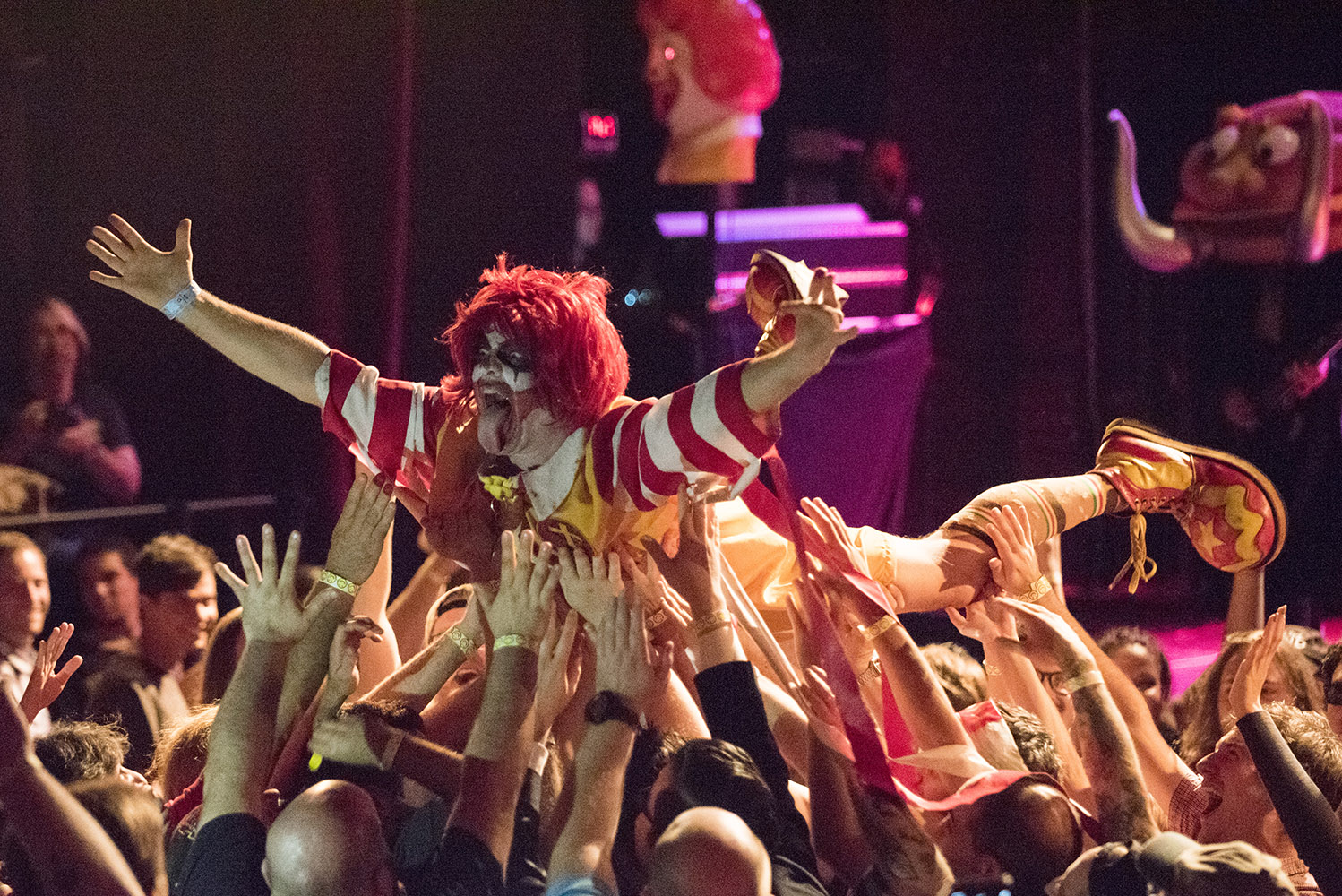 So do you think Ronald has succeeded in his mission to help us?
I think he is doing a darn good job of getting the message out, delivering it to larger and larger droves all the time. What we all do with that message is up to us. 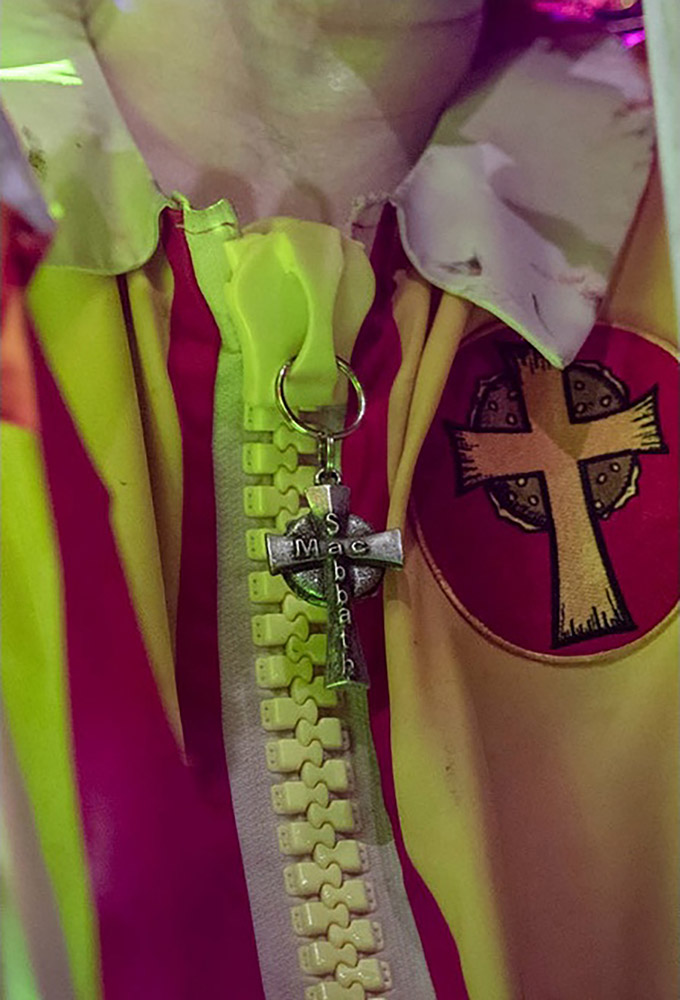 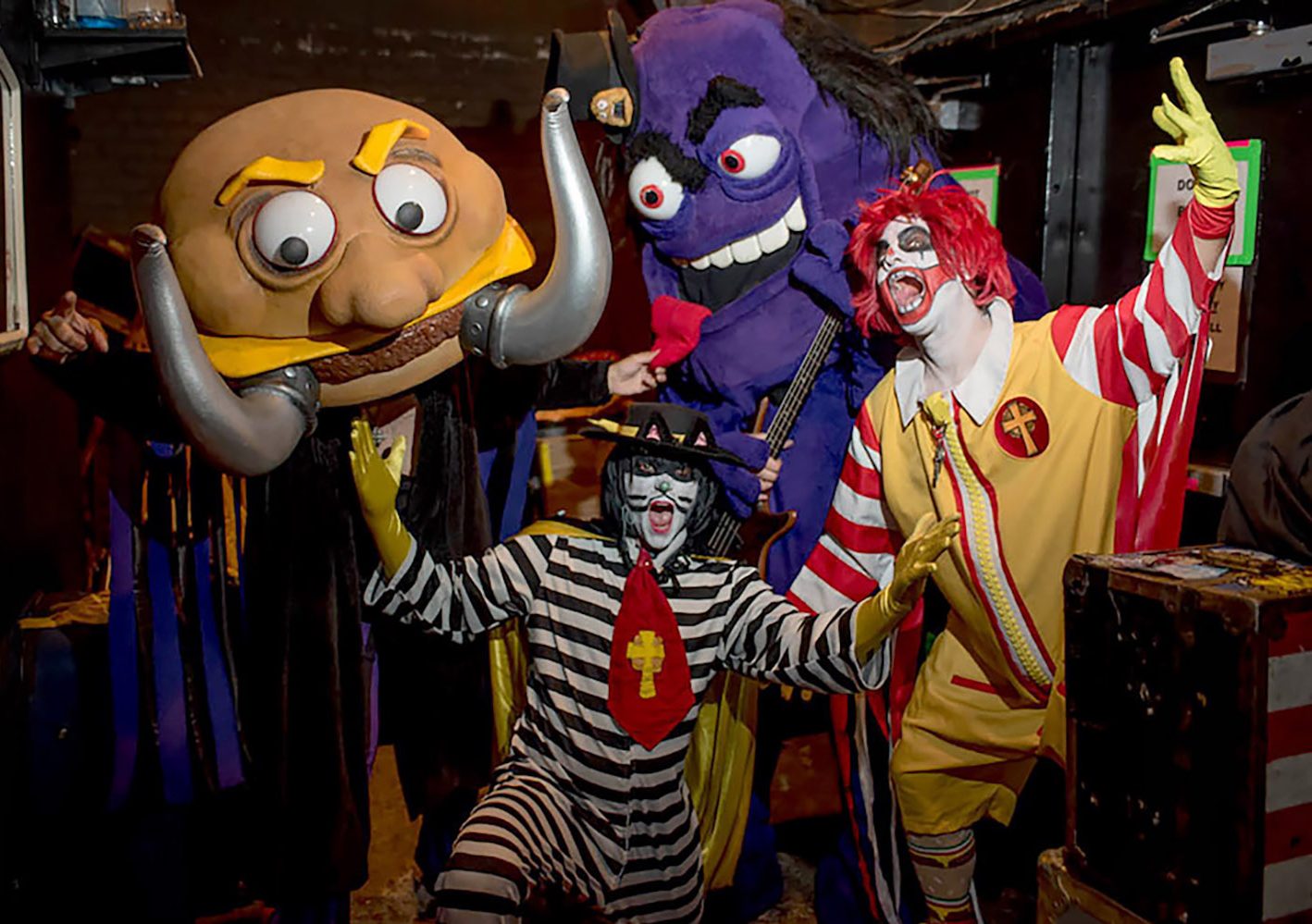