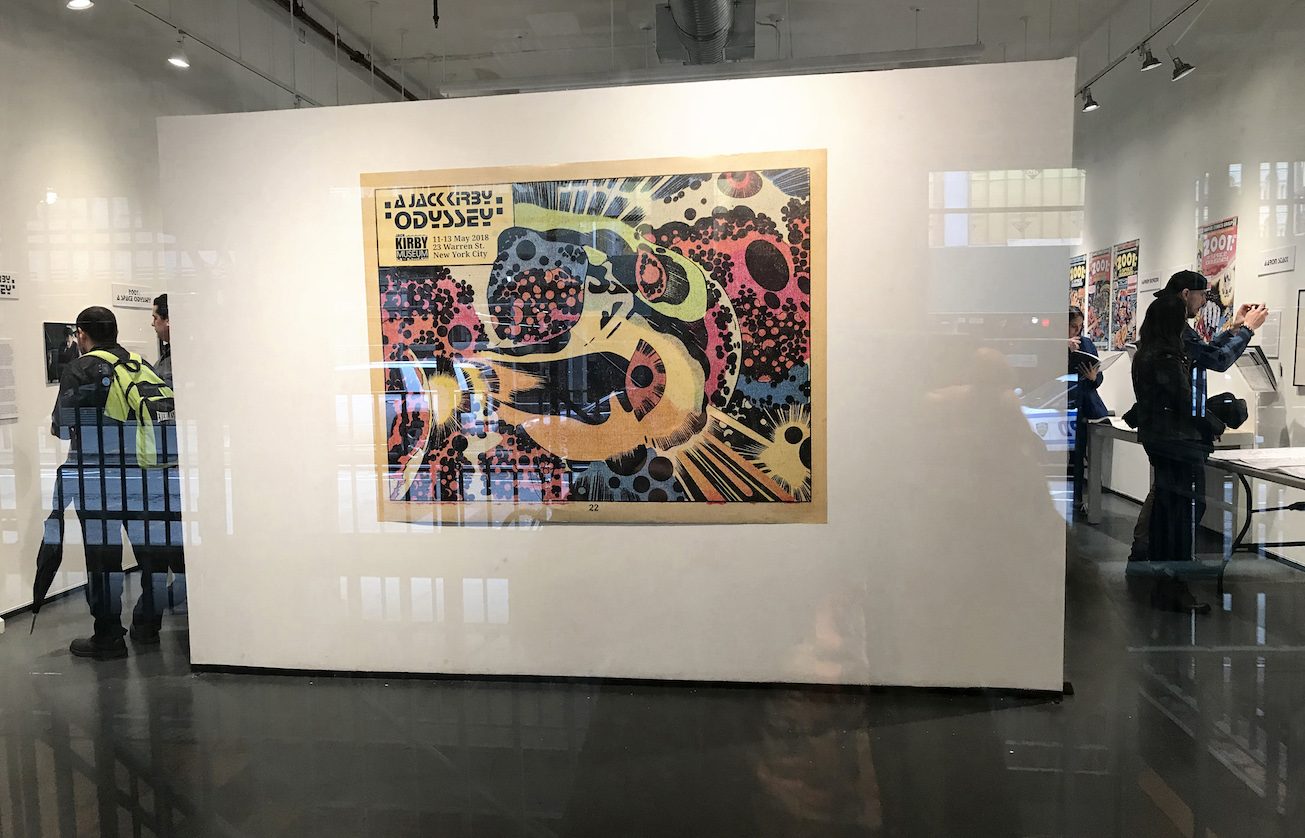 This weekend the Jack Kirby Museum hosted a special exhibit to mark the 50th anniversary of 2001: A Space Odyssey and Kirby’s visionary comics adaptation of Stanley Kubrick’s film masterpiece. The exhibit “A Jack Kirby Odyssey” was held at at the One Art Space gallery in NYC, to commemorate the King’s ultimate trip: adapting 2001 and the follow-up series he did for Marvel Comics in the mid-1970’s. 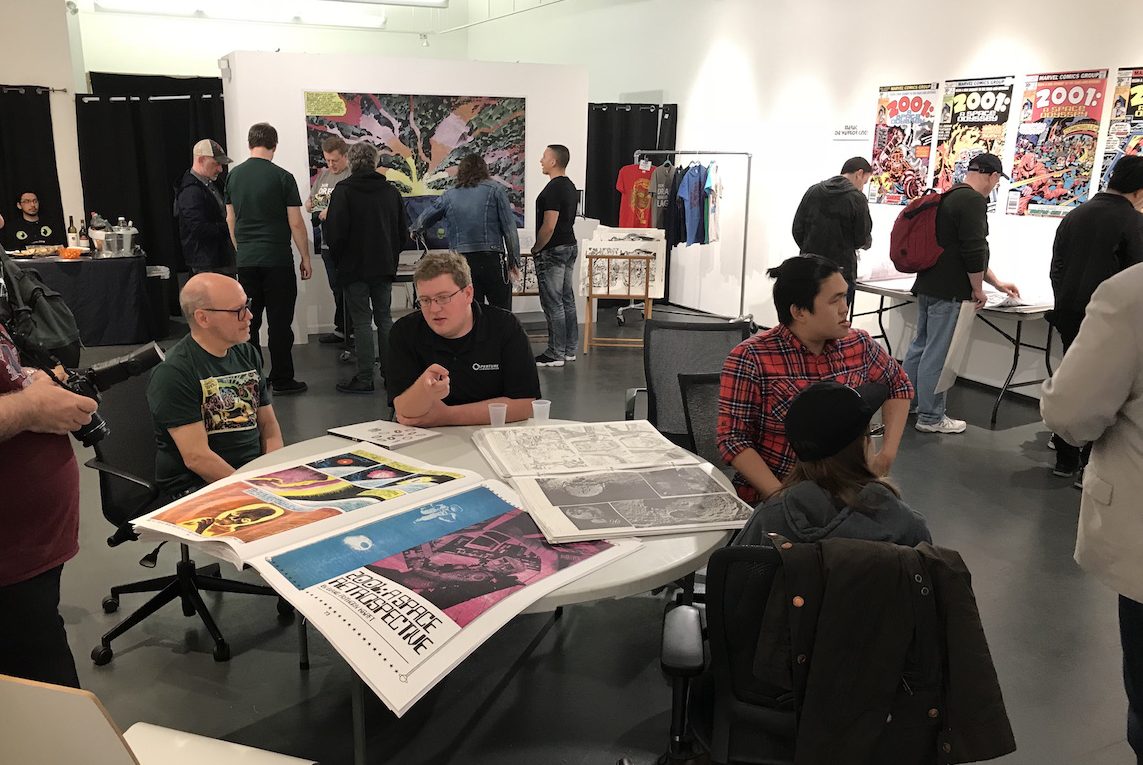 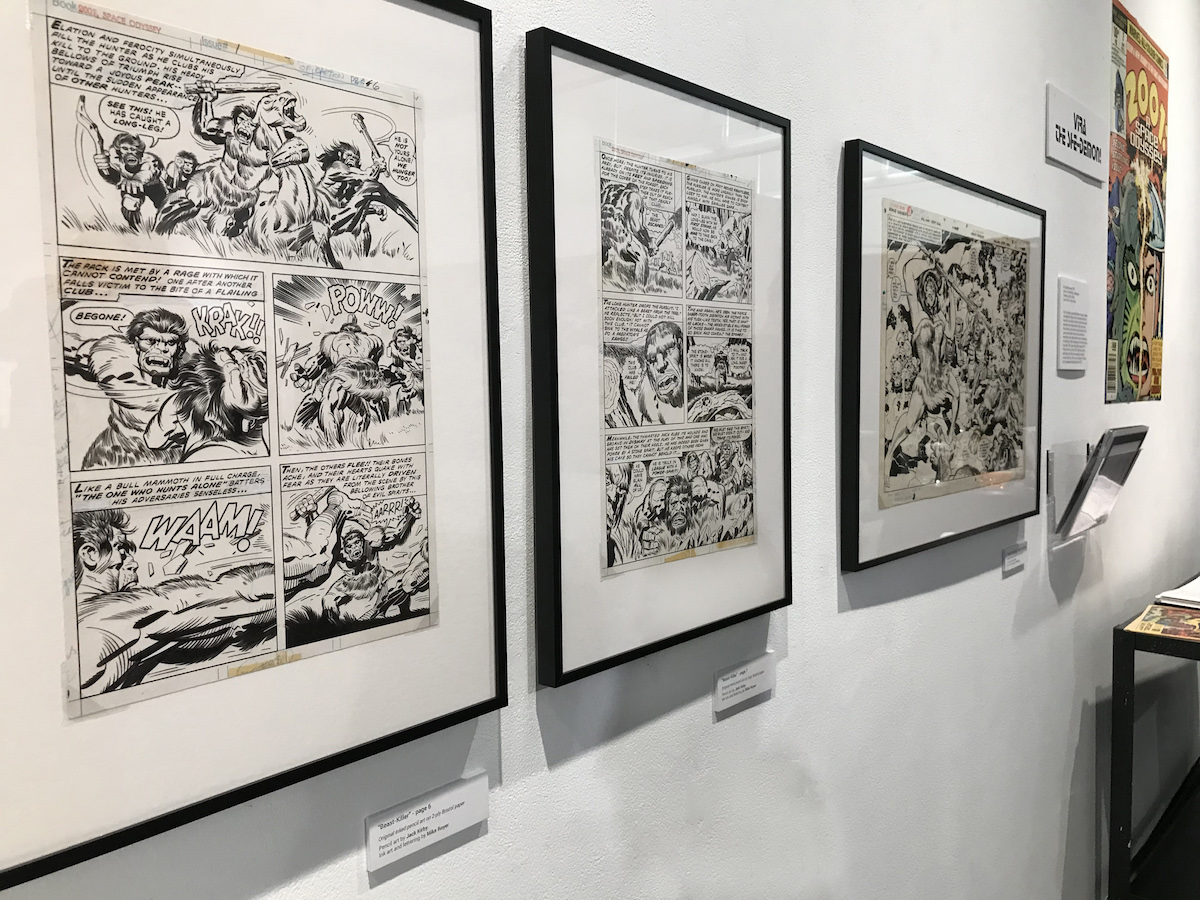 Chief among the highlights were large-scale reproductions of amazing comic art, as well as photocopies of Kirby’s pencil art which have never been reprinted. Even diehard Kirby-philes were impressed: As nice as the finished colored and inked product looks, there’s nothing like seeing the original pencils — especially at this huge size — which have an amazing rawness that absolutely crackles with energy and gives the work even more life. 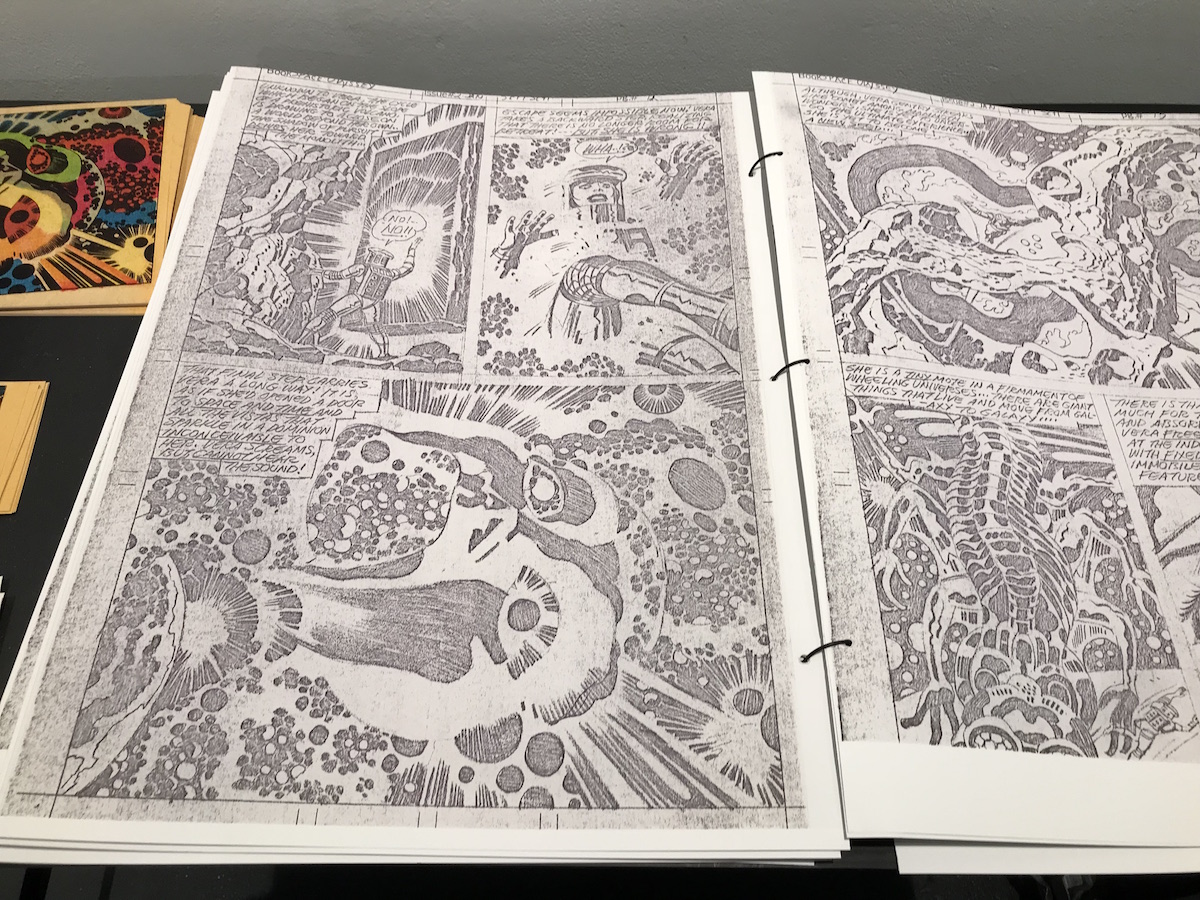 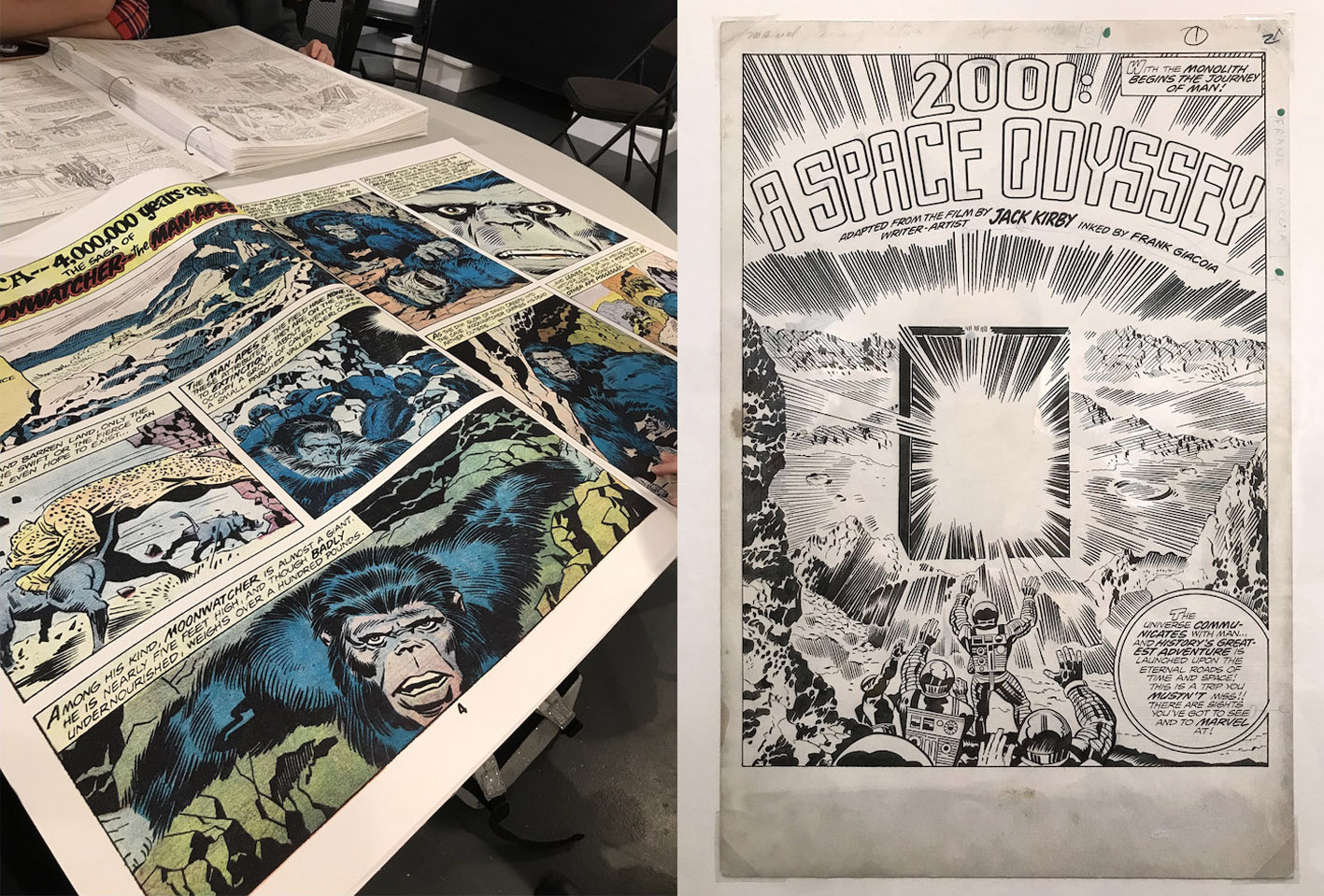 Also on the program: Mind-Breakers — a discussion on Kubrick and Kirby by Museum Director Rand Hoppe and cartoonist/historian James Romberger, a live podcast, and audio-visual dramatic readings of “Norton of New York 2040” ( 2001 issues 5 and 6), where Kirby predicted the rise of comic fandom and cosplay into an integral part of future society. 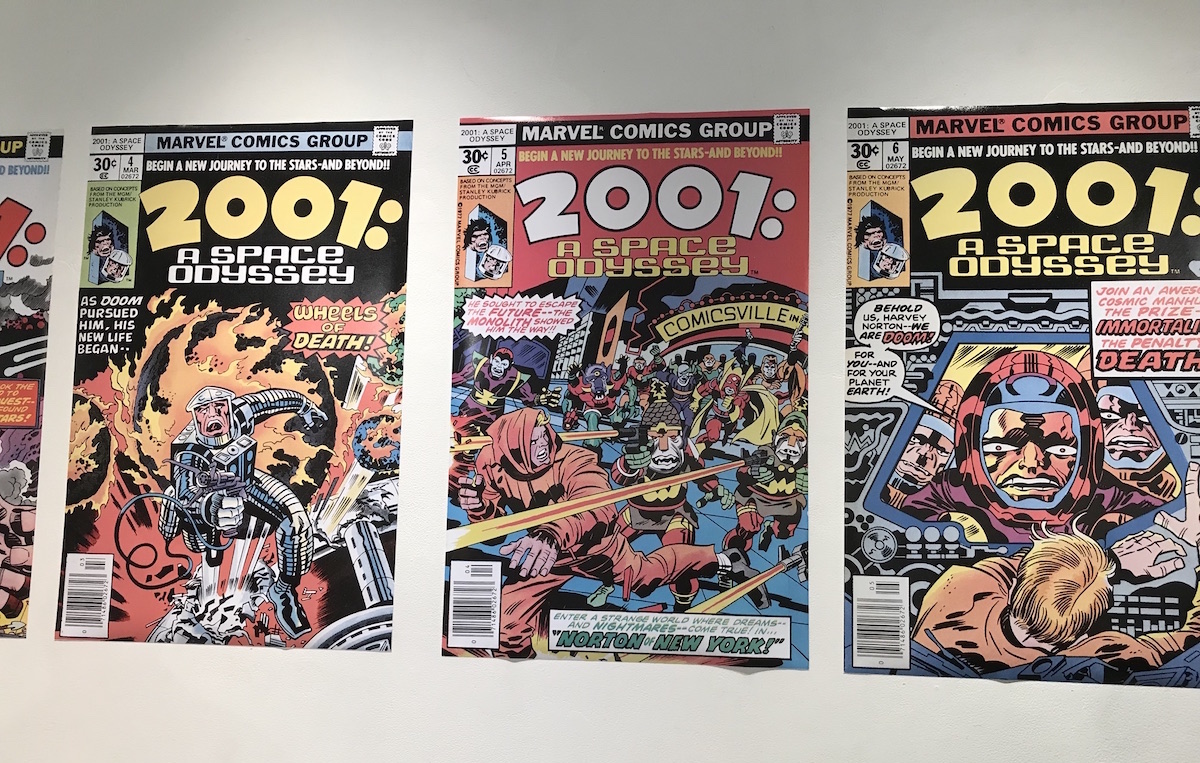 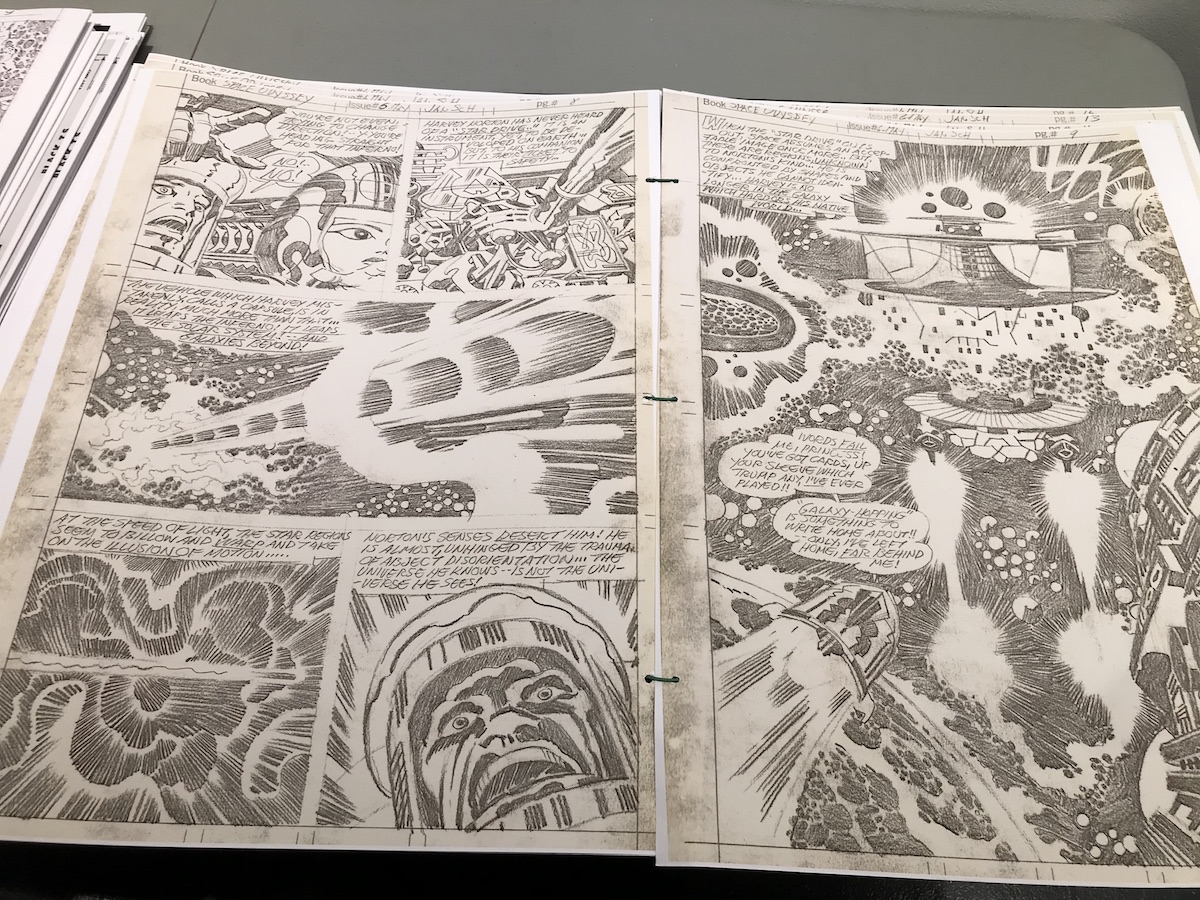 Said Hoppe: “Jack Kirby’s 2001: A Space Odyssey comics were pure Kosmic Kirby at the top of his craft, expanding on the 2001 story in ways not even masters like Kubrick or Clarke could have imagined.” 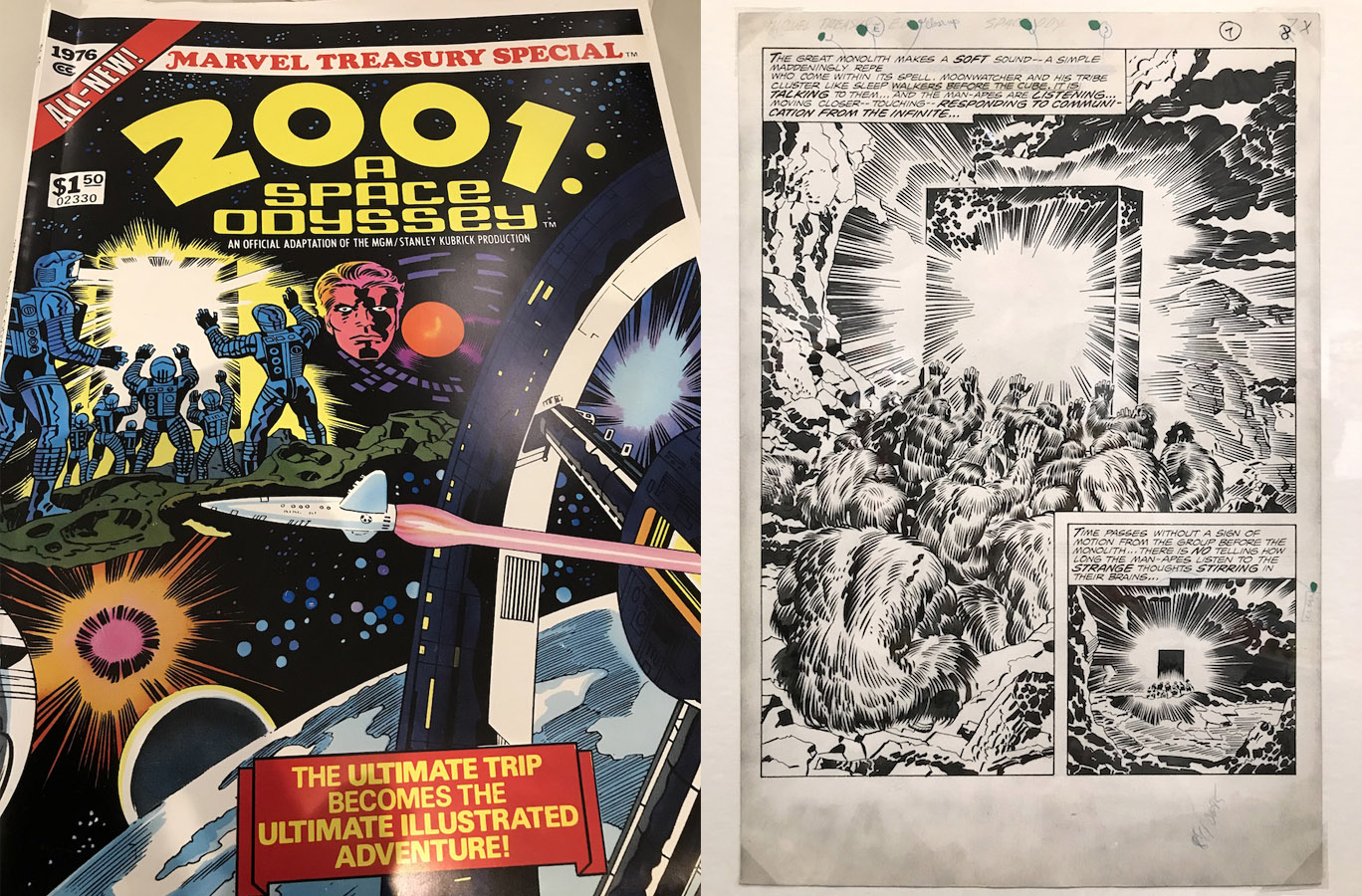 And as we stated in Cosplay Culture Magazine #36 for Kirby’s 100th anniversary:

Considered by many to be the single greatest creator in the history of comic books, Jack Kirby conceived more concepts and characters across more decades than any one person should logically claim. Patriotic superheroes, kid-gangs, surreal dream tales, and romance comics were just some of the genres he co-created or invented out of whole cloth over the course of almost five decades. Working with Stan Lee at Marvel in the 1960’s he truly hit his peak, reinventing and refining the superhero, for years steadily turning out fabulous concepts and characters which still resonate and enthrall today. His imagination is legend, as was his prodigious drawing ability and unbelievable page output, many drawn seemingly on the spot with no under-sketching. He essentially invented a whole visual language of kineticism, iconic representation, dynamic and impossible anatomy, and raw energy. His mastery of the medium was absolute, and Kirby continues to tower over everyone in the field like one of the many enormous space gods he depicted.

Having successfully imported the widescreen dynamics of cinema to comics, it’s fitting that many of his creations have today become big-budget blockbuster film spectaculars. With phenomenally successful adaptations of his characters such as Captain America, Thor, The Avengers, and X-Men coming at a frantic clip, many of Kirby’s iconic designs have become part of the pop culture language, influencing countless illustrators, designers, and filmmakers. Furthermore, his work has had a huge influence among the cosplay world, where his characters are continually celebrated and interpreted at every type of media convention across the globe. A visionary as well as an entertainer, Kirby made many predictions about the future, and the medium of comics itself, foreseeing the rise of the graphic novel and the greater respect and legitimacy it would bring, as well as the cultural rise of cosplay and fandom. Unfortunately, he didn’t get to see all of this come to fruition, as he passed away in 1994, but the legacy of his creations will likely live on well past the future he imagined. 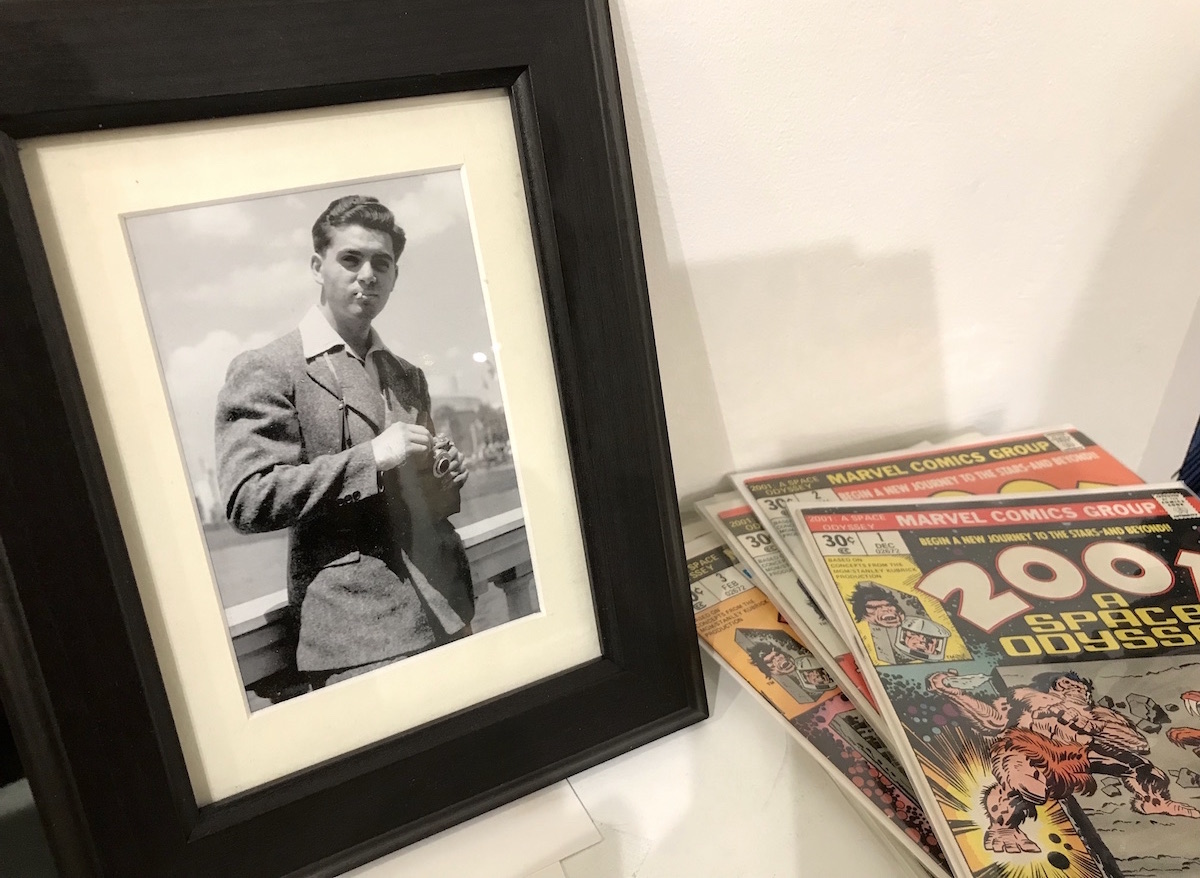 The Jack Kirby Museum and Research Center is a virtual museum dedicated to the study and preservation of Kirby’s work. The Museum sponsors and supports conferences, exhibitions, publications, and cinematic, theatrical, or multimedia productions.